March brings us spring, St. Patrick’s Day, and the craziest part of the basketball season—March Madness. Fans across the United States will get their fair share of wins and losses, upsets, heart-pounding moments, and excitement. Many elements make up a game of basketball in March Madness which reminds me of a lifestyle that has taught me a lot—farming. So to combine two of my favorite obsessions, here are eight ways March Madness relates to farming. 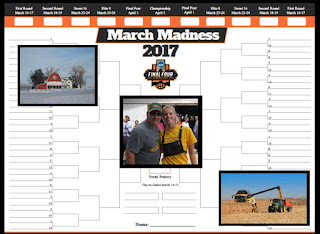 1. Unpredictable Brackets Are Like Unpredictable Markets
Mathematicians predict that you have a 1 in 9.2 quintillion chance of picking every outcome in the March Madness bracket—how about that for odds? But just as the bracket is unpredictable so are the markets for the agriculture industry. If farmers knew how the markets would play out then I guarantee you my dad would have fewer gray hairs on his head. Farmers take risks every day when it comes to the markets. It seems to change at least four times a day; 8 a.m. corn up 4, 11 a.m. corn down 5, 2 p.m. corn is back up by 4. Just as we speculate about who is going all the way in the tournament, farmers contemplate when to sell and when to hold off for the best outcome.

2. Predicting When the Lightning Will Strike
In most basketball games, teams get hot and cold, and in March Madness you never know when a team is going to bring the heat that makes the thunder roll and the lightning strike—I guess that’s why they call it March Madness. It’s no different for farmers—they are always watching the weather to see how it will affect their operation. But the weather can take an unexpected turn at any moment and leave farmers scrambling to make up for the sudden change in plans—just like a team that loses its momentum and then has to work to catch up to its opponent.

4. Knowing the Game Plan
Good basketball teams have a game plan that involves offensive and defensive strategies. Farmers work in the same manner with a game plan set in place for their operation. It usually begins before planting even starts—taking yield counts from previous years, selecting the right variety for a specific soil type, knowing what insurance to take for certain fields, and working to minimize soil erosion on all fields. They plan ahead to determine which fields to take out of production and put on the bench for a break. Just as coaches know who to play in certain situations, farmers know what to add and take out to ensure a profitable crop.

5. Referees for Basketball—Regulations for Farming
In any sports match we have referees to make calls—some we agree with and some that have the power to turn a whole game around. Regulations are the referees in the farming world—some protect and help the farmer, and some seem to work against a farmer’s best interest. Either way, farmers and basketball teams have to work with the calls made and make the most out of any situation. 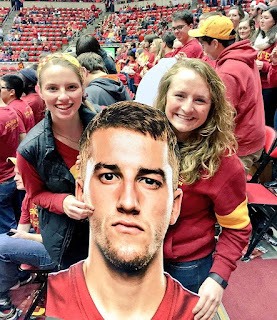 6. Slam Dunks
There are moments in all games when the spirit and moral is low, but a flashy slam dunk is all a team needs to turn things around. Slam dunks come around every once in awhile in the farming world—it’s a moment when things just click together, something as simple as a storm passing on a field of fresh cut hay or a sick animal finally overcoming its illness. Slam dunks keep us going for the promise of a new day.

7. Fans
No matter where the tournament takes a team, they will have fans that bring spirit and encouragement to each game. In a way, farmers have their own set of fans they can fall back on when times get tough. Faith and family are two things a farmer can always lean on for support. No matter where a team or farmer goes, fans provide support and encouragement every step of the way.

8. Teamwork Makes the Dream Work
The team is more than just the players alone; the coaching staff, managers, athletic trainers, bus drivers, and athletic directors come together to make the tournament a success. Farming is no different—family members, farm managers, farm hands, veterinarians, seed dealers, neighbors, and the community join to make the wheels go round. With all working together, no dream seems too big to accomplish.

In many ways the NCAA tournament relates to farming, but one key difference is that farming goes year-round. Food production does not take a time out. All these elements give a glimpse of what farmers go through 365 days a year. It’s a long journey—filled with trials, tears, excitement, and happiness—but it comes together in the end to make it all worthwhile. Exciting ball games; essential food production. Swish!

Posted by Council for Agricultural Science and Technology at 7:14 AM