When Halloween Meant Tricks, Treats, and Trashed Outhouses on the School Lawn


Farm of Horror:  As this video shows, a farm in England has been transformed into a house of horrors for the Halloween season. Of course it has to include a demented clown and a chainsaw maniac.

My childhood Halloween days on the farm were filled with small-time pranks, beggars’ visits to the neighbors, and a scary movie or two. We were amateurs compared to the older crowd that ruled the scene in the late 50s. That’s the era when a few James Dean imitators decided every Halloween weekend was a time to trash the streets.

We kids would stare out the windows as the folks drove us to town on November 1. We passed the school building featuring toilet paper trees, soaped windows, and shaving cream graffiti. An outhouse served as lawn decoration. "Probably from the Rogers place," Dad said. "Some years back a few of the boys hid in the dark until they saw the old man make his nightly visit. Then they tipped the outhouse over on its door. That's a tough way to finish the day." 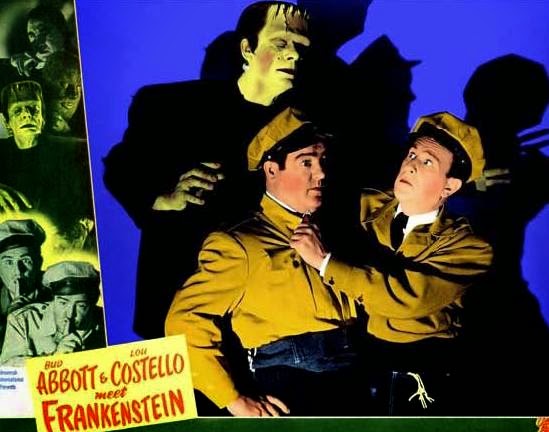 Dad had another story for us when we’d drive by the Zearing Cemetery. The mausoleum has been renovated in the past few years, but back when “Abbot and Costello Meet Frankenstein” made us wet ourselves, the building looked like something Edgar Allen Poe would have used for the setting of a demonic tale. “Some years before I was in high school,” Dad said, “I guess a few of the older boys took an underclassman to the cemetery and locked him in the mausoleum. He may have spent the night in there with the rats, cobwebs, and souls on the shelves. Didn’t do his nerves much good from what I heard.”

Post-Halloween streets in our small town often became obstacle courses. Cars had to weave around hog feeders, hay bales, and old tractors. One year they added a stolen manure spreader to the mix. I imagine the feces hit the fan after that; the vandalism craze seemed to die down some. By the time we grew into our delinquent stage, Halloweens had become football Fridays, bonfires, and keggers in the woods—outhouses became as scarce as zoot suits and Edsels.

Trick or treat nights still occur in our neck of the woods, but now the scary aspects seem to be warnings about razors in apples and high sugar content in the candy. The kids deck out in impressive outfits, and generally it’s become an occasion to score some junk food—with maybe a few granola bars and bananas thrown in to alleviate guilt. I'm all for healthy eating, but back in the 60s, celery sticks and baby carrots would have had us moaning like zombies.

When we visited neighboring farms, the creaking windmills and the barking dogs were spooky enough, and when the old farmer’s wife came to the door, we gave in to her demand—“I’ll give you a treat after you perform a trick.” So we’d sing a Davy Crockett song or do somersaults. I think we had it all wrong. Isn’t it supposed to be that if they don’t give you treats, you do a trick or prank on them? We didn’t get out much back then.

But we had fun—the costumes were minimalist, the treats were Snickers and popcorn balls, and the townsfolk were neighborly. It was nothing fancy, but the ghosts of Halloweens past on the farm still float by with a Casper-like smile on their faces.
by dan gogerty (top photo from fbcustom.me; bottom pic from jimzippo.com)

Posted by Council for Agricultural Science and Technology at 10:05 AM No comments: Links to this post

Handpicking Corn--an Art and a Hazard


Update: This Market to Market article/video provides a fascinating look at the old method of handpicking corn--a scene resembling a Norman Rockwell painting with people from all over the country gathered for a competition rooted in hard work.

That's the One We've Been Lookin' for, Boys"

Dad recently turned 87, but he still drives tractors and helps with the harvest. Although he respects the old days of farming, he’s a proponent of modern tech. “Can you imagine what it would be like to hand harvest the projected 14 billion bushels of U.S. corn this year?” he asks. “Even when the yields were much smaller, farmers usually figured on spending from early October to perhaps early December pulling ‘em in one ear at a time.” 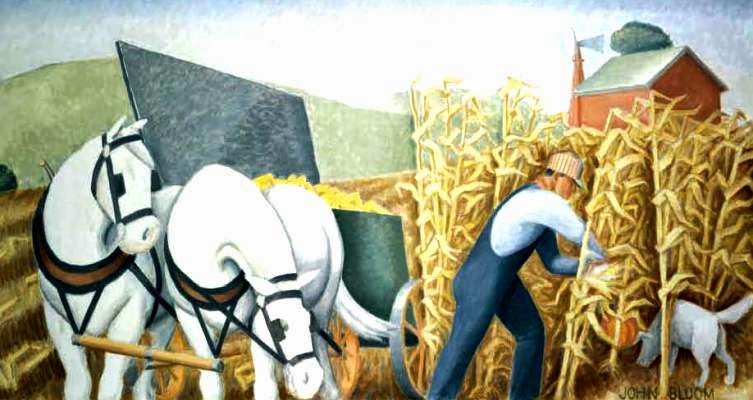 Handpicking corn was an art and a hazard. Apparently the virtuosos would constantly have one ear of corn in hand and another one flying off to the wagon. Most pickers used a metal hook or peg attached to their hand to rip the shuck. “Ears were expected to be clean as a ribbon,” says Dad. “And successful pickers had talented teammates—in the form of smart horses. They’d respond to the picker’s commands, and some horses instinctively knew when to move ahead by listening to the corn hit the bang board.”

Corn didn’t always hit the wagon board after it left the picker’s hand. “It was common enough to get hit in the head with an ear thrown from someone picking in an outside row,” said Dad. “My friend Don was from a family of 12, so they had plenty of targets in the field. They made Don's left-handed brother pick with a separate wagon because he was tossing from the other side, and his throws could be lethal.”

Handpicking could get competitive back then. Dad spoke with a 94-year-old from Hubbard who took on a challenge and claims to have harvested 200 bushels in one day. “He only got four cents a bushel,” said Dad, “and he even spent time unloading the wagons. But he was justly proud of his work.”

Competitions still occur to this day, as this Harvest Public Media video reports. This recent contest in Illinois had a simple goal: handpick as much corn as you can in 20 minutes. The winner was philosophical about it all. “It’s a connection to the past and a way to remember my dad.”

Old timers faced blizzards, “downed” cornstalks, stubborn mules, and endless patches of cockleburs, but they took pride in pulling in the crop before winter. The crews included hired hands, teenagers (some schools took a two-week harvest vacation), and day workers (aka the good old boys hanging out in front of Henry’s Tavern). Dad spoke with one old farmer who put it in perspective. “We’ve hauled nearly as much corn in the past few days as my Uncle Fred harvested during the entire fall of 1939. He hired out to pick corn by hand for a neighbor. By Thanksgiving, he’d picked 4,400 bushels, and by my reckoning, that’s 260,000 ears, and he did it one ear at a time. He got paid $175, enough to pay off his car loan.”

According to Dad, no one picked on Sunday back then. “Even the horses knew it was a day off.” But the crop came in, and sometime in late November or early December, the ritual ended. “And sure enough,” says Dad, “when that final ear of corn hit the bang board, some joker would call out, ‘That’s the one we’ve been looking for boys.’”

by dan gogerty (John Bloom painting from relylocal.com)
Posted by Council for Agricultural Science and Technology at 5:27 PM No comments: Links to this post

Baseball's Zen Cathedral in a Field of Corn


UPDATE Sept. 2016:
W.P. Kinsella died Sept. 16, 2016. His acclaimed novel, Shoeless Joe, became the iconic film Field of Dreams. This link includes an interview with Kinsella and other information about the famous ball field.

Update--May 2015:  As stated in the Des Moines Register, the long, bitter legal battle over whether Iowa's most iconic movie site should be redeveloped has reached a resolution of sorts--or at least its latest milestone in what feels like extra innings. Explore the making of the"Field of Dreams" in the summer of 1988 by scrubbing through this hour-long compilation of exclusive clips provided by the Iowa Film Office.  Skim to the latter parts of the old video to see filming at the farm: http://www.desmoinesregister.com/story/news/local/kyle-munson/2015/05/26/field-of-dreams-court-decision-rezoning/27964239/

Reflections on Baseball and the Field of Dreams

During this era of NFL-mania, baseball has faded—at times the sport seems to walk into an Iowa cornfield and disappear among the tall, mysterious stalks. But autumn is World Series time, and anyone with a baseball soul can pause long enough to enjoy “America’s pastime.” 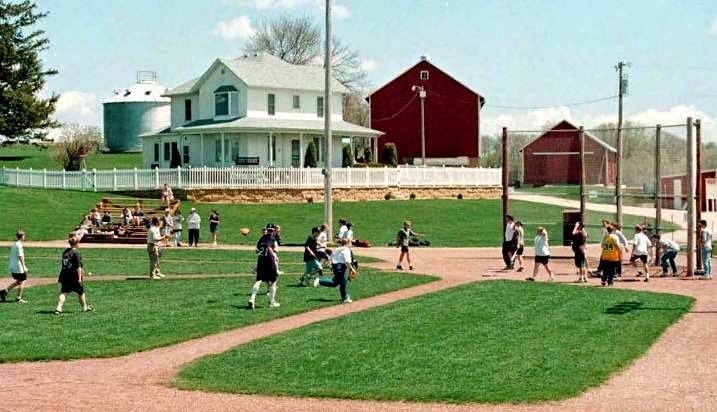 One unlikely spot where the spirit of baseball has not died is on a farm east of Dyersville, Iowa. Twenty-five years ago a film crew put the wraps on a Hollywood venture that included an obsessed farmer, his hipster wife, and a group of benign walking dead baseball players. James Earl Jones gave his “people will come, Ray, people will most definitely come” speech—and they have. As many as 75,000 fans a year visit the Field of Dreams, and this video report from Market to Market gives insights about its appeal.

I grew up in Iowa and my cousin lives two miles from the actual Field of Dreams, but I first heard of the movie while living in Tokyo. News reports started floating in about a Kevin Costner baseball movie, and a few American friends at the school where I worked ribbed me about a corny film from Iowa. I’d read W.P.  Kinsella’s wonderful Shoeless Joe novel, so when someone passed along a VHS version of the movie, I cued it up. 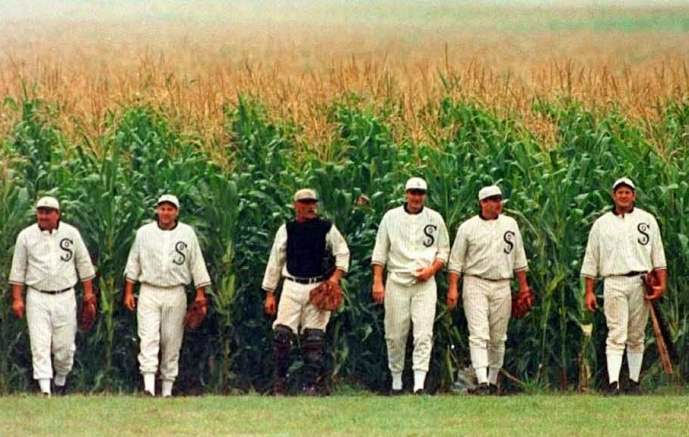 As I watched the beauty of my home state in the background, I thought about the pace of life, the traditions of the past, and the relationships we foster—or don’t. I let the film flow over me like a well-played baseball game—some hits, some errors, and plenty of time to think things through. Moonlight Graham walks away from something he loves—baseball—to work on something he loves more—healing the sick. Shoeless Joe makes an unwitting mistake that costs him dearly. Ty Cobb is such a jerk the others tell him to get lost—even after he is dead. And Ray Kinsella is haunted by his estrangement from his dead father who makes a weird but touching appearance at the end.

I was away from the United States for several years, but I’d kept some baseball connections—even if they then included unified “gambate chants,” sushi at the concession stands, and team names that included the Yokohama Whales and the Nippon Ham Fighters. Those two names have since changed, but Japan’s love of baseball hasn’t, and 25 years ago that sentiment made Field of Dreams a huge hit there. I’m not sure what most Japanese film-goers thought of a school board meeting in Our Town, Iowa, but the idea of ancestor worship hit a home run. When Ray calls out to his father and asks him to “have a catch,” nothing is lost in translation.

Our family stopped at the field several times when our kids were young—and yes, we “had a catch.” Sometimes we’d walk onto the field with only a few others around, the classic farm house sitting up the lane, the wind blowing gently through the iconic corn. At other times, a tour bus might pull in from Chicago—chances were that Japanese tourists would file off with gloves, cameras, and a desire to connect with some zen mixture of sport, nostalgia, and heritage.

Like baseball, the actual Field of Dreams has been the center of controversy, fame, good times, and bad. But when the sun is shining and family members are playing ball, the place truly is heaven.

by dan gogerty  (top photo from fieldofdreams.com, bottom one from desmoinesregister.com)

Posted by Council for Agricultural Science and Technology at 9:30 AM No comments: Links to this post