I usually take my last swing out in the garden before the World Series wraps up. Most years, our “fresh produce game” gets delayed sometime in October by light frost and finally called on account of a hard freeze. But this fall we did the equivalent of Ernie Banks’ “let’s play two.” I came away with a closing win on November 15 by harvesting a small amount of kale and spinach. Thanks to warm weather, the season had been extended. 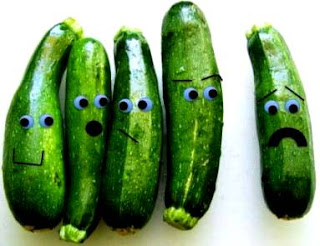 Like this year’s Chicago Cubs, we did well, but we didn’t finish the year without a few disappointments. My brother Tom is the team manager, and he spent a lot of time securing fences to keep out rabbits and deer--but ground squirrels still took bites out of the best strawberries, and birds flew in to enjoy my pepper plants. He also had to decide how to pitch a shutout against insects and fungi—stay with the regular starters (the natural weeding and mulching approach) or bring in a flame-throwing reliever (the chemical method)? Overall, our starting pitching was solid.

Tom is also the groundskeeper. His special compost is a magical mix of soil, old feedlot manure, food waste, grass, and leaves. He tills it in with a sputtering machine that has been around since Harry Carey first said, “Holy Cow!” The mixture helps us produce tomatoes, beans, broccoli, and other food items, but it is still no guarantee. While the kale maintained an MVP batting average this year (from May to November), the peppers had a slump, and for the second year in a row, the zucchini turned out to be mediocre—and in one case, violent.

I had harvested enough “zukes” to make a few stir fries, salads, and quesadillas, but a fungus ruined the rest, so I started to pull them. On one misguided tug, a stiff green leaf the size of an elephant’s ear stabbed me in the left eye. After uttering a few baseballisms not allowed on regular TV, I slowly realized that this bean ball would keep my eye watered up and blurry for the rest of the afternoon.

I wasn’t eager to admit defeat to a zucchini, so this play was not recorded on the official box score. But after a week of discomfort, I finally went in for a checkup. “Scratch on the cornea. Nothing too deep; should be OK in time.” Two weeks later. “Seems to be a slight mark, but this should heal with time.”

I guess the opticians are right. Now three months later, it no longer waters up and causes irritation. But things still seem blurry for a while when I wake. Maybe it’s a psychosomatic trait in my love-hate relationship with zucchinis. As one meme says, “Zucchini is like an annoying relative. You don’t like it—but have to act happy when it shows up on your doorstep.”

So I’m doing some off-season maneuvers to get a bumper crop. Maybe a trade—try different seeds. Maybe shore up my defense—find a natural powder or something that can beat the bugs and fungi. Maybe wear a batting helmet when I’m on the field with them. One way or another I plan to beat my two-year zucchini slump and produce some winners next season. After all, the Cubs are once again focused on “just wait’ll next year,” and they’ve been at it since 1908. I see prize vegetables and a World Series win in 2016.

by dan gogerty (pic from makefunoflife.net)

Posted by Council for Agricultural Science and Technology at 10:42 AM No comments: Links to this post 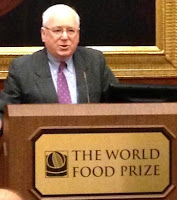 During a recent speech to the attendees of CAST’s Annual Fall Meeting in Des Moines, World Food Prize (WFP) President Kenneth Quinn made it clear that the Council for Agricultural Science and Technology (CAST) should remain an important part of the annual WFP week-long event. Standing under a huge portrait of Norman Borlaug in the WFP Hall of Laureates, Ambassador Quinn pointed out CAST’s connections with the “man who saved millions.” He also noted that CAST delivers clear, science-based information about agriculture, and it honors influential communicators through its Borlaug CAST Communication Award (BCCA).

Many in agriculture emphasize the billions of people who must be fed in the future, but the future is now if you are a starving child. That is why events like the World Food Prize are so important. The annual gathering in Des Moines, Iowa, acknowledges the past legacy of pioneers like Dr. Borlaug while honoring dedicated ag/science experts of the present--those working hard to put food on tables. The WFP also focuses on the future--with speeches, programs, and recognition of the talented young people who are building on the foundations others have constructed.

Since 2010, CAST has played a small but important role in the WFP movement, with its presentation of the Borlaug CAST Communication Award. Well-respected researchers, diplomats, and academics have won the award, but all have one thing in common: they convey important information to the public and policymakers alike. 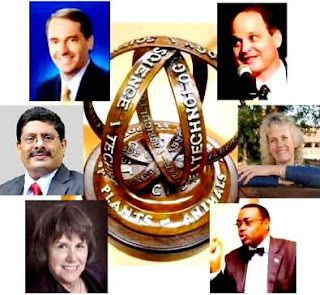 During the October 14 BCCA event honoring the 2015 recipient, Dr. Prakash, Ambassador Quinn emphasized CAST's contributions. "We need to build roads if we want to feed people." His roads include technology and communication, and he recognizes that CAST plays a needed role in publishing credible ag/science material--and in conveying that information.

CAST EVP Kent Schescke summed it up this way: "We appreciate the opportunity to present the Borlaug CAST Communication Award as an important side event to the World Food Prize celebration; this provides the opportunity to link the important roles of science and technology in addressing the challenges of global food security."

Note: Nominations for the 2016 Borlaug CAST Communication Award are open. Click here for details.
Posted by Council for Agricultural Science and Technology at 10:39 AM No comments: Links to this post