Update March 5:  President Obama Vetoes Keystone Pipeline.
The Senate failed to override President Barack Obama's veto of a bill to construct the Keystone XL pipeline, the first of many confrontations expected between the Republican-controlled Congress and the White House this year over energy policy.

Update--March 2: Could a Compromise Work for the Keystone Pipeline?

In a time when polarization is more popular than viral cat videos on YouTube, a middle-of-the-road solution is probably not on the table for the Keystone Pipeline, but according to this editorial, Michael Bloomberg has a good idea: "The Obama administration should negotiate directly with the Canadian government, and come up with a climate pact that would more than offset the emissions that would be generated--indeed, are already being generated--by mining the oil from the sands. Though it is unlikely to satisfy the partisans on both sides, it is a wonderfully sensible solution."

I don't know the specifics of the plan, but I do know...

Oil issues were so much easier when we cruised around in a 1960’s teenage stupor. I could pull up to a pump at the local DX station and watch the owner fill the tank with gas that cost 37 cents a gallon—even less if a “gas war” was on. I had no idea about octane levels, miles per gallon, or the source of our fuel. It came from the pump, and it powered my ’56 Chevy so it could take me to school, ball games, farm jobs, and the drive-in theater in Ames.

Since then, complications have set in: shortages, gluts, environmental issues, real wars, and biofuel options. If I were seventeen again, maybe I’d be talking about pipelines and ethanol rather than Hurst 3-speed transmissions and 8-track sound systems.
Pipeline Debate

President Obama recently made good on his threat to veto a Republican-backed bill to approve construction of the Keystone XL oil pipeline. This is great or disastrous depending on who is bending your ear about the issue. This article looks at both sides, but you could probably spend the rest of the week reading articles online about the debate.

In 1967, we’d be at Pooch’s gas station, shootin’ the breeze, watching Johnny pull up with his tanker truck. As far as we knew, the oil came from some wells in Texas that James Dean and Rock Hudson had once fought over. "Fill er' up."

The U.S. Environmental Protection Agency plans to offer a proposal for Renewable Fuels Standards for 2014, 2015, and 2016 this spring--finally. This is also a contentious issue (what topic isn’t nowadays?). Some Senators are working on a bill to eliminate corn ethanol mandates in the RFS, while others, such as the National Corn Growers, think that would be a huge mistake.

We used to spend hours cruising country roads that were bordered by oceans of cornfields, and not one of us Eddie Haskells looked across the fields and said, “Gee, maybe we could stop and insert some corn in the tank for fuel. It will be environmentally friendly and ease our dependence on foreign oil.” The speaker would have been called a dork, dipstick, or worse.

Maybe it is a good time nowadays to keep “shoving corn into the fuel tank.” And maybe yet another pipeline is needed. I’ll leave those decisions to others. I just pine for the days when the conversation was focused more on sock hops, chrome rims, and the rumors of a weekend kegger.

We may have been dipsticks, but we produced enough hot air to fuel a high-performance engine. Come to think of it, some of the dipsticks in the current debates are also good at pumping out hot air. Let’s hope folks work together on both issues to do what’s best for the country. We need more cruisin' and fewer traffic jams.

by dan gogerty (top pic from redbubble.com, bottom one from flickr.com)
Posted by Council for Agricultural Science and Technology at 10:35 AM No comments: Links to this post

New research suggests that for your health, it is better to wash dishes by hand--the dish washing machine might be responsible for sickness and allergies. Actually, the findings are a bit sketchy, but they are the latest to support the hygiene hypothesis, a theory suggesting that people in developed countries are growing up way too clean because of a variety of trends, including the use of hand sanitizers and detergents, and spending too little time around animals.

My folks are fine with this theory. They still wash dishes by hand, although Dad does regret the loss of the dish washers they had for several decades. "We had five of them, but they all grew up and left home. You boys were more like the Three Stooges at the sink, but the two girls were reliable and didn't break things as often."

By default, my parents also supported the hygiene hypothesis because we grew up on a farm. Some research suggests that farm kids have fewer allergies than city kids do—our immune systems protect us by learning how to fight bacteria and other invaders. We need to “get down and dirty." My siblings and I were the perfect study group for this “unhygienic theory.” 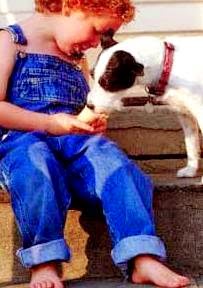 About the time JFK was asking the country to ask not, we were exposing ourselves to just about any germ that had ever heard of central Iowa.  During summer—before we were old enough to do much farm work—mom would open the screen door after breakfast, letting us out and a few flies in. Dad and his brother ran the traditional corn, soybeans, pigs, and cattle farm, but in reality, it was a 400-acre magic kingdom for my siblings, cousins, and me.

The creeks, barns, pastures, and groves provided the types of playgrounds no modern designer could match. And even though we never thought of it, these places must have been crawling with enough germs to make a bacteriologist drool.

During a typical day, we might crawl through poison ivy, build dams in murky stream water, and run through clouds of ragweed pollen. Our kid quests would take us under rusty barbed wire fences, through tick infested groves, and across pastures laden with fresh cow pies hidden in the grass.  By lunchtime, one of the gang had been stung by a bee, stabbed by a fish hook, or hit in the back with a mud pie.

We didn’t call it locavore food back then, but the hearty noon meal gave us a few minutes to pick cockleburs out of our socks and flick a few garden peas at a brother when the folks weren’t looking. For their part, Mom and Dad would take a head count, tell us to be safe, and then release us again after the 12:30 cartoon show was over.

We’d had the usual school vaccinations, and in those days, the folks might “cleanse us” with deworming medicine or take us in for a tetanus booster shot if we stepped on something nasty in the creek. By the time we returned to the house each summer day, Mom could shake the dust off our overalls, but we had spent the hours as host organisms in a rural petri dish, so I imagine a half billion or so germs stayed attached.

After supper, we slid out into the yard where we played ball or set up miniature farms in the dirt.  The barn cats scratched around with us, and my brothers occasionally shared their tootsie roll pops with our dog, Smoky. By the time the mosquitoes let up and the lightning bugs started flashing low along the grass, we knew it was time to go in.

I don’t know if we farm kids ended up with fewer allergies and illness, but if having fun is a way to immunize yourself from disease, then we had a heavy dose of some powerful medicine.

by dan gogerty (photo from corbisimages.com)

Posted by Council for Agricultural Science and Technology at 9:48 AM No comments: Links to this post


In 1963, my seventh grade English teacher told us to read a book about humor for a presentation, so I latched onto a copy of Robert Paul Smith’s Where Did You Go? Out. What DidYou Do? Nothing. If memory serves me well, it is about “free range kids” and the chance for youngsters to use their imaginations. Because I grew up on a farm with reasonable parents, numerous playmates, and plenty of outdoor attractions, the book’s theme worked for me. Kid life should have times of exploration, imagination, and goofy fun. My siblings, cousins, and I excelled at the goofy part.

But in this age of drone parents and smartphone GPS tracking, the term "free range" holds various connotations. As reported by NPR, “Parents have made news recently after being detained for purposefully leaving children on their own, prompting renewed debate about so-called free-range parenting." I guess it’s a fine line between independence and neglect. Family dynamics, a child’s personality, and, of course, location might be factors in how “free” children can be—whether that means playing in the pasture or walking to school. 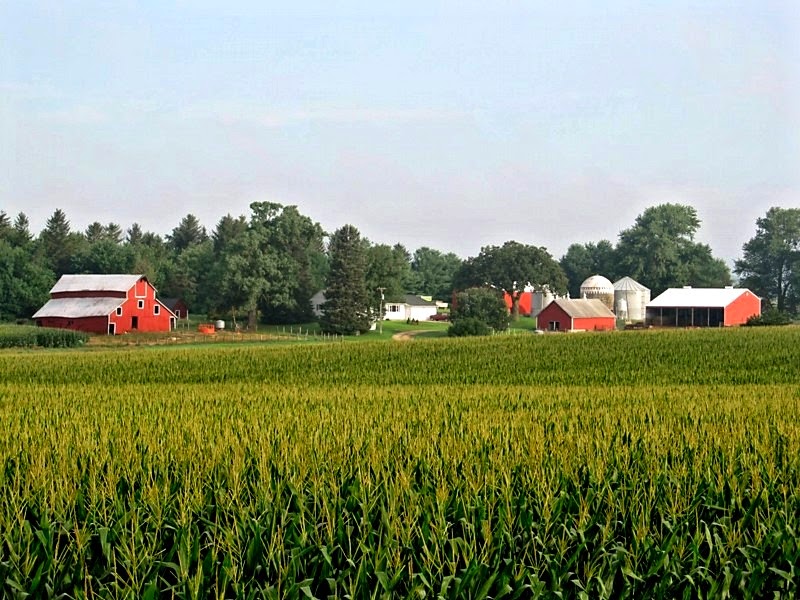 I’m just glad I grew up in an era when the term “free range” was not in our lexicon. Neither was the term “confinement.” On our farm, the hogs, cattle, and chickens had basic shelter when needed, but they had plenty of feedlots and pastures. As a matter of fact, they escaped their pens so often, maybe that’s why the term “free range” was coined. We farmed before the era when a pig might not see the light of day until it is carted off to the bacon factory.

We kids saw the light of day no matter what the season. After breakfast, Mom would access the app (aperture) called the front door and scoot us out so we could download the fascinating world a farm had to offer: groves, haymows, pastures, creeks, tree houses.

We didn’t have smartphones to download games, take Instagram pictures, or text our friends. Instead, we were building dams on the creek, playing king of the hay stack in the barn, or sledding down a snow-covered hill in the pasture. We also missed the digital parent syndrome—no GPS on us if we slipped farther down the creek to check for beaver dams; no text message warnings from parents about putting on enough sunscreen; and no curfew alarms on our cell phones.

I’m a grandparent, so I know child safety is important. Maybe we were just lucky back then, but at the end of our free-range sessions, we made it back to the house in basically good shape, ready for a late afternoon snack and maybe a viewing of the Mickey Mouse Club. Annette Funicello with mouse ears and Mom’s homemade cookies—we were free rangers, but at times we didn’t mind being confined.

Note: check these out

** Book: Farmlines--Living in the Days of Dumb Phones and Analog Apps

Posted by Council for Agricultural Science and Technology at 5:58 PM No comments: Links to this post