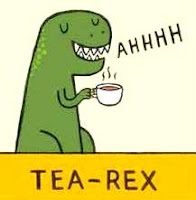 Looks as if I missed yet another calling—tea sommelier. As this article points out, experts can “unlock new flavors in your food by pairing it with tea.” For example, “a hot cup of green tea melts the texture of goat cheese and enhances its creamy notes.”

Like their wine counterparts, tea sommeliers must know where the leaf is from, how it’s made, the aroma, flavors, and so on. They give advice—the ultimate tea leaf readers.

Although I have decades of tea-drinking experience, I’ve kept my amateur status. Growing up on a farm, I—like the rest of my family—became addicts early. During hay baling, bean walking, or ball playing, iced tea was the drink of choice. We had deep well water softened by the Culligan man, and we made a straight, black tea that was strong enough to keep us awake while driving tractors or milking the lone Guernsey.

Overseas employment took my wife and me to a couple of tea-loving countries. Australians use to boil it up in “billy cans,” and on one trip across the Outback, we accompanied a couple of New Zealanders who organized regular tea breaks on the famous Birdsville Track. Out came the Sterno stove, Carnation milk, and loose-leafed tea. “When it’s bloody hot like this,” said Ollie, a Kiwi physician and part-time gold prospector, “hot tea makes a fellow sweat. Much better than that iced nonsense you Yanks drink.” I drank his concoction, but I’d rather have had a cup of nonsense. 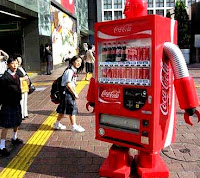 While living in Japan, we drank green, barley, jasmine, rice, kelp, and many other types of tea, but ironically, straight black iced tea was not prevalent back then. Of course we tried green tea ice cream, and eventually the vending machines there included just about any liquid you could imagine—milk tea in a can was the most normal. We admired the cultural significance of a real Japanese tea ceremony, but we’d occasionally slip off to McDonald's where we could buy fresh-brewed black tea.

Maybe I could have succeeded at the sommelier thing after all. My kids thought I was a tea snob; on vacations, I’d drive out of the way to get fresh-brewed rather than some powdered mix or tea in a bottle. But as I read on in the article about professional sommeliers, I realize it takes some sacrifice. “Black tea goes surprisingly well with Chiriboga blue cheese,” says one expert. “We once served a pu-erh tea with celery root that had been cooked in a pig’s bladder,” said another sommelier. “We wanted it to highlight the earthiness of the tea on the palate without competing with the fragrance of the bladder course.”

On our farm, we drank iced tea with our pork chops, and hot tea with grilled cheese sandwiches, but I’d be a boring sommelier. I’d just have to say something like, “Pour a glass of strong, black tea on ice and enjoy it with one of Mom’s fresh-baked cinnamon rolls. Believe me, it brings out the flavors.”

by dan gogerty (top pic from pinterest.com; bottom from toxel.com)
Posted by Council for Agricultural Science and Technology at 11:58 AM No comments:

Drones Down on the Farm--A Matter of Perspective


Update July 2016: The Slurpee Has Landed

With the drop of chicken, coffee, and a Slurpee, 7-Eleven made a drone delivery in hopes that the procedure will become a regular thing. Aside from the fast-food angle, some think the deliveries could be used for humanitarian and medical purposes. For another drone-delivery perspective, see the blog "Amazon Left a Pig on My Doorstep".

Fall 2015--drones (and regulations) in the air
** The US Department of Transportation announced that purchasers of drones will have to register the devices with the federal government as part of a new "national registry."

** This video story from the CBS Sunday Morning Program gives a good overview of the drone situation, including a look at agricultural involvement.

The Eagle Has Landed--A Blow

An Australian drone user had an unexpected encounter with a feisty raptor when an eagle took out his flying machine.

Drone Woes
According to this article, rogue drone operators are rapidly becoming a national nuisance, invading sensitive airspace and private property--with the regulators of the nation’s skies largely powerless to stop them. In recent days, drones have smuggled drugs into an Ohio prison, smashed against a Cincinnati skyscraper, impeded efforts to fight wildfires in California and nearly collided with three airliners over New York City.

Eyes in the Skies... I'm Glad They Were Not Around When We Were Kids

The hype seems to be real. Drones are coming, and agriculture is fertile ground for them. As this Forbes article points out, aerial drones will be a major part of the tech revolution on the farm. Another article mentions the cost—thousands of dollars—but it says farmers will still go for the long-term benefits. They will use them to monitor crops, apply chemicals, tend livestock, and do myriad tasks involved with the precision agriculture wave.

On the other hand, I’m glad they weren’t around when we were kids on the farm. My siblings, cousins, and I spent days playing in pasture creeks, making hideouts in barn haylofts, and climbing trees in the groves. A parental nanny drone would have hovered as we pushed each other into muddy back waters; as we used b-b guns to shoot old bottles at the junk pile; as we tried to light corn-silk cigarettes behind the shed. No doubt some company already has a “Big Brother Drone” for sale.

Some farmers might also have second thoughts about the coming swarm of drones. Neighbors and regulators will be able to swoop in and check on crops and livestock. Companies will gather data used for advertising and promotion. And some folks just want to maintain a bit of privacy in this high-tech age. A California man has been charged with downing his neighbor’s drone with a blast from his 12-gauge shotgun. The Hatfields and McCoys might be able to use drones in future feuds.

Speaking of privacy, field work used to have a tranquil zen quality to it—the open spaces, the vast horizon, a connection with nature. And when another type of nature called, the farmer could hop off the tractor and stand behind a huge tire to “water the crops.” Now you’d have to worry about who’s watching from above—a precision ag drone? a neighbor’s unmanned vehicle? the NSA? The term “digital streaming” takes on a whole new meaning. 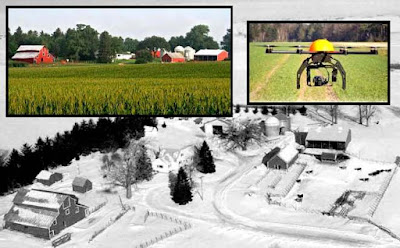 But when I think of my boyhood farm from a drone’s eye view, I don’t envision digital cameras and hours of live video. I see photographs taken by my Uncle Pat in the 1950s. He was an expert photographer, and he hitched a ride with a farmer who owned a Cessna so he could fly over our land and get aerial shots.

Pat’s eye view is frozen in time: I see a picture of cattle eating in feedlots, crops swaying in the breeze, creeks flowing through pastures, and groves of trees long since gone. I see a five-acre section of virgin prairie at the back of the farm—lonely, untouched, and beautiful. I see farmers tending livestock, stacking hay bales, and driving cab-less tractors. I see sunburned kids running down the lane with the dog and heading out to see what adventures a farm could hold on a hot summer day.

Drones are immediate, precise, and filled with digital data. Pat’s photos are old, static, and filled with analog abstractions. Drones are the future, but it’s still fun to take flight over the farm with a throw-back set of nostalgia lenses on.

Posted by Council for Agricultural Science and Technology at 11:25 AM No comments: