Label Talk--Part 3: How Do We Fix Food Labeling Problems?

Last week, I shared some thoughts about why food labels (specifically process labels) are good and bad. This week, I am going to wrap up some thoughts about how we make the food mislabeling issue better through the recommendations of CAST authors (experts, researchers, and scientists), my thoughts, as well as others’ ideas.

How do we fix this?

From the CAST authors 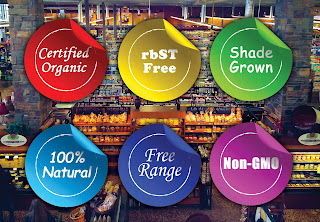 There are recommendations that experts, researchers, and even marketers prescribe. You can read a few of them in the short handout covering highlights from our food labels paper, but here is the main takeaway:

Food labels should be clear communication points based on sound science that allow consumers to make the best decisions available. Food labels should not condemn certain foods based on misinformation (e.g., GMO v. organic foods). If a product can cause human harm, the authors suggest it should be mandatory. Any room for misinterpretation or misleading information should be minimized by providing a clear consensus statement backed by scientific evidence on the package. When that can’t be done, then the label shouldn’t be used.

From me
We, the consumers, have a right to know what is in the products we are buying. We also have a right to choose the products that match our desires and values. In order for us to make the best choice, we need labels with clear messages that are based on strong scientific evidence.

We need clear communication. We need to be able to understand what the package is truly saying about the food without an agenda. But that will be hard to work considering we are a society driven by consumer demands. There is give and take--we won’t be able to completely eradicate the problem of mislabeling, but we can get closer than we already are.

From others
What originally sparked my interest in writing this "Label-Talk" series was reading what agri-bloggers have recently shared:

Conclusion
Sorry, I made you read all that just to tell you this:

There isn't a straight answer to fixing the misuse of food labels, there are just too many facets, but we can improve their use by focusing on strategies that remove misleading labels, reduce the misuse of labels, and provide clear, concrete messages backed by strong scientific evidence.

Final Thoughts
I believe it is important to mention how difficult it is to cover large, hot-button topics like food labeling. This blog series is a shallow representation of the depth of research, law, policies, regulations, etc. on the subject--there is just so much information and so many questions that can arise from looking for answers.

But we have some great resources to help you get started.

If you have questions or comments from this three-part series or about our papers, please share them with us in the comments or on social (@CASTagScience). We’d love to hear from you.

CAST also provides publications filled with credible, peer-reviewed research to create recommendations, list implications and precautions, and often provide case studies. These authors and reviewers are some of the top scientists and experts in their fields. We really care about providing credible, balanced information to nonscientists who are interested in agriculture, animal, plant, and food science.


Check out our publications.

Finally, if you have an idea for a publication based off a concern or question you have, drop us a line.

Posted by Council for Agricultural Science and Technology at 9:06 AM No comments: Links to this post

Government Rulings, Futuristic Machines, and the Smell of Fresh-cut Hay

Farmers who planted cover crops on prevented plant acres will be permitted to hay, graze, or chop those fields earlier than November this year. The USDA adjusted the 2019 final haying and grazing date from November 1 to September 1 to help farmers who were prevented from planting because of flooding and excess rainfall this spring.

While this farmer built an operational hay baler able to do the work of three square balers, this hay bale wrapping machine takes it all a step further. It appears to be a “cross between a carnival ride and a futuristic time machine." Nowadays, most hay is baled up with round balers—and this review explains why that trend has been prevalent. However, some still want the small, rectangle bales, and the throw-back essay below explains what that once entailed.

Every summer, a rural intoxication returns to our part of the Midwest. When farmers cut the first crop of hay, I drive to my folks’ farm, roll down the windows, and let the aroma from a neighbor’s field seep in with the dust from the gravel road. If the hay is lush and fresh—and if a warm humid breeze carries the scent of alfalfa, orchard grass, and a few remnants of clover—you can feel the memories activate, and you can catch visions of an era gone by. 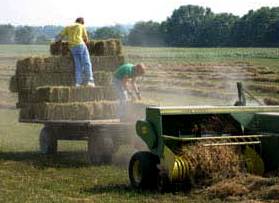 Nowadays, the few farmers who bale hay in our area use high tech equipment and generally produce huge round bales. Some decades ago, the ritual was more complicated. Everyone used machines that produced square, fifty-pound bales that we could stack and transport to the barn. We boys would grab the bales as they came out of the chute and then stack them on the rack in hopes that the load would hold together. If the bales tumbled off on the trip to the barn, you deserved all the ridicule you were sure to get at lunch time.

As we got older, we could hire on with baling crews, and if you joined up with old Clarence, you were in for a wild ride. He wore bib overalls and a tan safari hat while driving the tractor that pulled his customized baler equipped with a powerful “Wisconsin engine.” As my cousin Tim said, “He could bale trees with that machine.” Clarence would put it in gear, seldom look back, and rarely slow down. If the field was bumpy, we were like drunken sailors on the rack, and the only thing that held us down was grabbing the bales. They were extra heavy because Clarence used wire instead of twine, and we occasionally had to team up to hoist a bale to the top row of the stack.

Speed was fine with us since Clarence paid by the bale—a whopping penny a bale—so if the machinery didn’t break down and rain didn’t set in, you could make twelve dollars or so in an afternoon. That bought a lot of gas for a ’56 Chevy back in 1967.

Those images are gone, as most hay fields now have seven-foot-tall round bales casting shadows in the evening sun. But new-cut hay still has the aroma, and anyone who rode a rack will remember the heat, the lifting, the hypnotic sound of the baler—and the satisfaction of a job well done on the last ride in at sunset.

by dan gogerty (top pic from locusthill.jpg, and bottom pic from livingthecountrylife.jpg)

Posted by Council for Agricultural Science and Technology at 9:05 AM No comments: Links to this post

Label Talk--Part 2: The Pros and Cons of Voluntary Labeling

This post is the second installment in a blog series focused on the use (and misuse) of food labels, as well as how government agencies are trying to clarify the meaning of food labels through ongoing efforts (For example, “sell by” or “use by” dates recently caught the attention of the media). You can read the first post in the series here.

Let’s play two truths and a lie. Guess which of the following statements is the lie:


How’d you do? Did you figure out the lie? Was it easy? Let’s briefly walk through them so you can either feel secure about your food packaging knowledge, or have a fun fact to pull out in the next food-labeling-themed trivia night.

The first statement is correct and, technically, so is statement two (there are other factors that determine the use of food labels, but many updates are driven by a collection of consumer feedback to the FDA). That means the third statement is false--to a point.

Many of the food labels we see aren’t mandatory on packages; the nutrition label, the name of the product, and the weight of the package’s contents--these are definitely mandatory labels on packaging. But many labels that tout how the product was processed or maintained don’t need to appear (example: "rbST-free milk"  is not mandatory on dairy products, but its use comes with a caveat.)

The agencies in charge of food labeling and marketing have regulations in place via laws such as the Food, Drug, & Cosmetic Act, but they mostly supply guidelines for the food industry to use. The guidelines promote clear and accurate labeling practices, but they leave a lot of wiggle room for marketers to position their product as the best available on the shelf.

Before we start walking toward the event horizon with the nuances for different types of claims, I’m going to choose one type of label to focus on to show: process labels. Why? Because their misuses are a good example of labeling gone wrong.


What is a process label? A process label tells consumers how their food was made. Specifically, what acts (read: processes) were used to transform the food into its final product that is packaged in the store.

Why do consumers want to know about where their food comes from? Food comes from a lot of places nowadays, which leaves consumers blind to the actual production process. Sure, some places open up their production facilities, but that doesn’t mean consumers can observe the entire process, let alone afford to travel to every place that makes their favorite foods.

Process labels are driven by consumers’ desires to know how their food was made and if that production process aligns with their values. It creates transparency when literal transparency can’t happen.

What's the harm in process labels?
Just like anything in life, there are pros and cons to consumer labels.

For the consumer, process labels are perceived as a good thing. They let consumers feel like they have more control over deciding what foods they choose to eat. Consumers also connect to brands based on perceived values from package labeling, which can build trust. On the other hand, labels allow producers and marketers to communicate with their target audiences. And process labels create a perceived value to the product which allows them to stand out from the competition.

But everything comes with implications:

So what can federal and state governments do to fix these issues in a way that benefits consumers, agriculturalists, and brands? We’ll talk about that more next week.

By Kimberly Nelson
Disclaimer: This blog series does not reflect the views of CAST. The views presented are the author's.
Posted by Council for Agricultural Science and Technology at 3:31 PM No comments: Links to this post