The Siren Call of the Vending Machine

February 2015: Zen and the Art of Vending
Known as "jidouhanbaiki" (自動販売機) or by the shorter "jihanki" (自販機), the machines are a feature of the landscape wherever you go in Japan.

Nov. 2014:  Analyze This--Robot Knows What You're Thinking? Nestlé Japan will soon begin using a humanoid robot to sell Nescafé machines as the company devises new ways to appeal to customers in the brand’s biggest market. The company claims that the robot can read human emotions.

October 2014 :  Farmers and foodie companies realized the appeal of using vending machines to sell raw milk, eggs, or fresh meals on the go. This article looks at the early steps of vending machines going farm fresh.

I have a love/hate relationship with vending machines—


I’ve used them around the world, but as you can read below, one tried to steal a child from me some years ago. Now if a new robot "salesperson" can tell if I'm sad, happy, or freaked out, I'm wondering what's in store for vending machine personalities.

Some machines seem simple enough. Two innovations popped up recently, and unlike many of the “food items” in the past, these have a healthy ring to them.

One is a veggie machine called the Farmer’s Fridge, and the concept is simple. The owner figures any successful machine must include moderate prices and convenience, so he is restocking this salad vendor on a daily basis and trying to make a go with his veggie vending.

The other one is more specific. An agricultural company in Japan has placed a tomato vending machine in a Tokyo train station area. They are catering to joggers and walkers from a nearby running route that rings the Imperial Palace. The slogan is “tomato loading” and the cost goes at $3 or $4 dollars, depending on how big a tomato you want to load into your system.

I'm still cautious around Japanese vending machines. Because of one decades ago, I know I left at least one child behind during my long teaching career. Alan was a thirteen-year-old American, and I left him at a train station eighty miles north of Tokyo.

A colleague and I were herding thirty-two international school students back from a week-long excursion, and the bullet train we were on made one of its few scheduled stops. Long enough to tempt Alan off the train as he answered the siren’s call of the vending machine on the platform. Not long enough for him to make a purchase and get back on.

Japanese vending machines offer everything but handguns, and Alan was hypnotized by the choices: Three types of coffee, various tea combinations, soft drinks with or without ice in small or large cups, Coke, Aquarius, Fanta Orange, and the ill-named Calpis, a white liquid that reminded me of milking our family cow when I was an Iowa farm kid.

By the time Alan’s buyer’s paralysis let up, the train doors had sealed, and as we watched out the windows, he faded into nothing but a shadow in the neon glow of the station. I could imagine the vending machine thanking him with its robotic female voice: “Domo, arigato gozaimashita.” Alan probably made the polite retort, “doo itashimashite,” before noticing the train had left.

Alan eventually made it home; I kept my job; and I have refused to make eye contact with vending machines ever since. Salads, tomatoes, or Twinkies—whatever the product, these modern cyborgs have one goal: to lure you in and part you from your money. I think I’ll do my tomato loading in the old fashion ways.

dan gogerty (top photo from yahoo.com and bottom photo from toxel.com)
Posted by Council for Agricultural Science and Technology at 12:17 PM 1 comment: Links to this post


Folks used to sit on the porch shootin’ the breeze. For many now, the porch is a cubicle and the breeze is digital. These are a few of the stories floating around our cyber porch today.

Bovine Waterbeds: These Ohio dairy cows get to sleep on 14 gallons of water covered with a tough rubber exterior. And in this blog, we get a closer look at Cows, Waterbeds, and Bovine Sleeping Habits.

Bovine Emissions: According to police, methane gas from a herd of flatulent cows caused an explosion in a German dairy shed. The roof was damaged and one of the ninety cows was injured. Click here for a deeper look at Bovine Emissions, Ag Research, and Bossy the Flatulent Cow.


Hold Still and Pee, Please:  Cows at a stock show in Colorado were greeted by 15 veterinary students from Colorado State University. They held sample cups under the animals to gather testing specimens. As one student said, "It's a game of luck, but there's no way to make the animals pee on demand."

by dan gogerty (photo from usatoday.com)

Posted by Council for Agricultural Science and Technology at 12:25 PM No comments: Links to this post

Amazon Left a Pig on My Doorstep


Drone news buzzes overhead everyday--many pertaining to agriculture. Here are a few of the latest:
-- 5 ways drones could change the way America eats
-- A new center for unmanned aerial systems research will be led by several land grant universities and the Federal Aviation Administration
-- And for better or worse, just throw this drone in the air and it follows you around

As this video shows, the FAA proposed rules regarding drone use, with agriculture, industries, movie studios and others anxious to get them flying. But others are wary, with privacy and near-miss problems in mind.

Smartphone Drones?  This reporter says, "Over the next decade, we'll see the rise of lightweight drones that fit in your pocket. In all practicality, they will be flying smartphones." For agriculture, this could add benefits to the precision ag movement, or it could edge us into a brave new farming world where "the good earth" becomes more virtual than real.

Others are touting so-called "quadrotor" drones that are cheap and apparently easy to use.  From herding cattle to guided tours and film-making, there seems to be a drone for everything. Amazon is planning to use them for delivering parcels.

Amazon Delivery Drones are Fine,
but the Watkins Man had Personality

Several news sources indicate that the Amazon company knows us so well they will be shipping items to us before we order them. They analyze our buying habits and move goods to a hub close by. Combined with their proposed drone delivery system, this could get interesting, but I want them to know, they ain’t so smart—we had anticipatory deliveries back in the days when digital referred to fingers, not a way of life.

The Watkins Company out of Minnesota started delivering spices, vitamins, and household cleaners back in the 1870s, and when I was a farm kid in the late 1950s they were still driving down dusty farm lanes on a regular basis. They would anticipate which households might need some cloves, candles, or castor oil.


Mom bought into their vitamin plan, but it’s safe to say we kids didn’t anticipate that delivery. We thought they tasted like horse pills, so for a while my brothers and I would excuse ourselves from the table to wash up, then hide the tablets behind the toilet. Eventually Mom found a gooey pile there, and I imagine our folks gently explained that we should take them the correct way or they might have to turn them into a suppository device.

Amazon might soon have the vitamins on our doorstep within minutes--by drone. This seems Jetson cool, but it will be tough maintaining the personal touch with this method. I’m not sure how the Fuller Brush man knew you needed a whisk broom for the back porch, but that human contact probably helped make sales. The milk delivery person was usually there in time to call out a cheery “good morning,” and in many places you could get groceries delivered by some eager youngster. 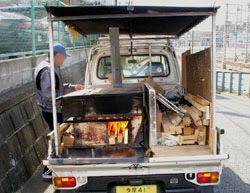 During our years living in Japan, my family used several of the anticipatory delivery services—the tofu man walked his cart by daily; the sweet potato truck, with a wood fire in the back, drove by enticingly on cold winter nights; and a diaper service would come every other day—soil bucket out, clean bundle in. They were data mining way before the techie companies of today by finding out which families in the crowded neighborhoods of Tokyo recently had babies.

This current Amazon craze might work or it might backfire. If they try to replace the Schwans ice cream trucks in our small towns, they will need to use dry ice or something to avoid a soggy package delivery. And if they start anticipating too much, things could get ugly. In our neck of the woods, fresh bacon is almost a religion, and if those drones start depositing 240-pound feeder pigs on doorsteps, the authorities are gonna raise a stink.

dan gogerty (milk pic from edgecastcdn.net, japan truck pic from japantimes.co)
Posted by Council for Agricultural Science and Technology at 10:15 AM 1 comment: Links to this post