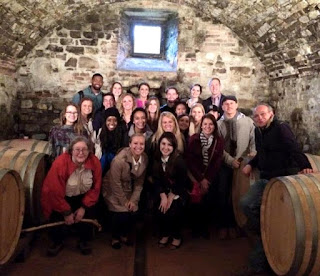 Millennials study abroad in higher numbers than any previous generation, and even though warts might pop up at times, the overall concept seems to be popular and successful. This website looks at the top 10 myths about university study abroad programs, and it explains why the system is more accessible, affordable, and beneficial than many think.

While it is impossible to generalize about student experiences, many university websites offer specific insights through student written blogs. The University of Florida maintains an attractive, informative study abroad site, and readers can click on the “blog from abroad” section to travel vicariously to Holland, France, and New Zealand, as well as other destinations.

Students are usually the best advocates for the programs (photo above: Iowa State University group at Italian winery).

Kayla Chalfant, CAST’s Finance Administrative Assistant, has been on two spring break study abroad trips with Iowa State University. “The experiences have been completely positive for me,” says the 21-year-old senior majoring in accounting and management information systems. “Both trips gave me cultural experiences, some hands-on challenges, and a chance to meet new friends.” 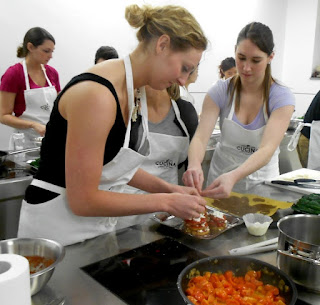 During her trip to the Bahamas, Kayla (student on the right in cooking photo) studied hospitality and event management—students worked with the public at the front desk and main call centers. In Italy, the group examined entrepreneurship and sustainability at a winery and at the city market. “Their restaurants and markets are interesting,” said Kayla. “I was impressed with the way they use and display all parts of an animal.” She also enjoyed the cooking class. “They showed us how to make great dishes from local, healthy food. By the way, the wine tasting session wasn’t bad either.”

The amount of education, money, and hassles involved with each trip varies. Kayla pointed out that she had a research report due as a follow-up to the Italy trip. “As with most travelers, I gained plenty from seeing other people, places, and situations.”

She also benefited from good health and smooth travel. “We did have a cab breakdown in the Bahamas. A mad rush and some frantic moments got us to the airport for the final flight out.” Her Italy itinerary also went well, but a couple of fellow students missed a flight connection in Paris. “I guess it could be worse. Some of them thought it was cool to visit the Eiffel Tower and stay in a posh French hotel.”

As with any study abroad, everyone hopes it turns out to be a truly Bon Voyage.

Posted by Council for Agricultural Science and Technology at 2:59 PM No comments: Links to this post


Summer heat can still be dangerous for farmers and others working in the sun, but technology has changed the “thermostat setting” in many ways during the past 50 years. A farmer might turn up the air conditioning in the tractor cab, adjust the fans in the climate-controlled hog confinement building, and then send a precision drone out to check for growth problems in the middle of a 100-acre cornfield. 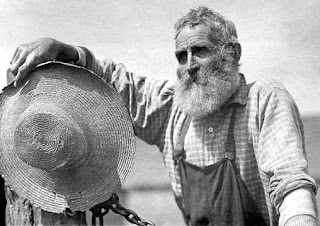 Things were different in the 1960s when I was a kid growing up on a Midwest farm. We knew the heat was on when the old timers finally put away their long underwear. As Dad says, “Long-sleeved, loose-fitting denim shirts and bib overalls were the uniform of those days. One neighbor never did shed his long johns. He’d just switch from wool to cotton in the heat of the summer.”

We kids wore T-shirts, baseball caps, and shorts when we’d weed soybean fields, but long pants were a necessity when baling hay. Not much concern about sunburn then—peeling skin, poison ivy rashes, and sweat-filled days just came with the territory.

When a real heat wave hit, Mom would set blocks of ice in front of a fan in the kitchen; and if we finished enough work around the place, we’d hop in the car with our cousins and head to the Hubbard swimming pool. Seven or eight of us then rode home in a hot, dusty station wagon with no air conditioning. The popsicles we bought at the concession stand dripped onto our wrists, and flies buzzed--but we had jumped off the high board and played “gonzo keep away” in the pool, so we felt refreshed.

Dad says we had it easy compared to the days when he was a kid. “Refrigeration was in its early stages, and the work was more manual. But we learned to adapt and live with the heat.” Here are some of his recollections:

--The Dettbarn family used to shock oats by moonlight. They wrapped a gallon crock jug full of water with a soaked burlap bag and stored it under an oats shock.

--Location was important. You could take a break while haying by lying in shade under the hayrack; corn crib alleys usually provided a cool breeze; and horses might submerge their heads in the stock tank while farmers sloshed their arms and necks under the well pump spout.

--Old Martin’s family had an ice house. The boys sawed 100-pound ice blocks from a local pond in winter and stored them in an insulated building packed with sawdust and canvass. Ice cream, cool drinks, and food storage. I loved walking into the bigger ice house in Zearing. A cool blanket of air and Abbey Roberts would hand us a few ice chips to chomp on. Occasionally, Abbey and Dad would share a cold bottle of Grain Belt beer. 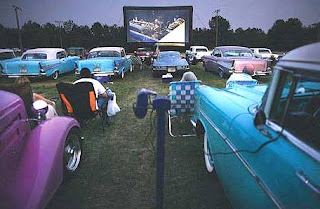 --Farm work was tough—no cabs on tractors, but farmers had some protection from straw hats or an umbrella clamped to the binder’s cast-iron seat. Kitchens were also blast furnaces, but some folks had “summer kitchens,” small attached rooms that provided more air flow while the wood or coal stoves were baking meat or cherry pies.

--After a day of pitching hay, some guys headed for a swim at the local creek or gravel pit before stretching out to sleep under the stars in the backyard. On weekends an evening breeze might cool the kids eating popcorn and sitting on folding chairs while watching a Tom Mix western at the outdoor movie located on Main Street. We usually had enough money left over from the dime movie and nickel popcorn to buy a cold Coke at Harry Martin’s café, where a big, slow ceiling fan kept the air moving.

Dad’s right. By the time I was a kid, air conditioning was coming in, and technology--like grain augers and milking machines--was making life a bit easier. But we still used some of the old techniques from Dad’s era—with modifications: we joined other teens at the gravel pit to play rock music and do loops off the rope swing into deep, cold water; we went to outdoor movies equipped with cars, window speakers, and teenage hormones; and we occasionally shared a cold bottle of something that came from the Land of Sky Blue Waters.

by dan gogerty (top pic from pinterest.com; bottom pic from realclear.com)
Posted by Council for Agricultural Science and Technology at 12:55 PM No comments: Links to this post


I grew up on a pig farm, but my early days of working with them were not always "magical." In my blog entry of May 28, I wrote about our experiences “droving” or moving pigs on our farm decades ago. It was worse than herding cats—and more dangerous—as far as we kids were concerned.

Last week I came across a fascinating history of real hog drives—we’re talking thousands of pigs on the move from Tennessee to Georgia back in pre-Civil War days.


“The Great Appalachian Hog Drives” by Mark Essig looks at a time when pig drives were common. “Hog droving, as the practice was known, formed an essential link in the global economy. In peak years as many as 150,000 hogs made the journey on this single turnpike, and many other mountain routes also carried pigs from upland farms to the Deep South. And it all depended on a few men herding hogs through the mountains of North Carolina.”

A few tidbits from the book:

** As the United States grew, traveling hordes of pigs crisscrossed the country in all directions. The farmers who rushed to settle the West after the Revolutionary War soon returned east with pigs to sell. Around 1800 some of the first Corn Belt hogs were driven from Ohio farms to Baltimore slaughterhouses. Other hogs walked from Kentucky to Virginia, from the Nashville basin to Alabama, and from southern Illinois to Chicago.

**  By the 1840s and 1850s, a growing rail network mostly ended the era of long-distance driving, but the railroad builders were stymied by the Blue Ridge Mountains, which separated the hog-raising regions of Kentucky and Tennessee from the Deep South. A few farmers from the Bluegrass region of Kentucky—pig country before the horses took over—walked their hogs through the Cumberland Gap and all the way to Charleston, South Carolina, a distance of more than five hundred miles.


** Before motorized trucks became common, nearly all livestock went to market on foot: cattle, horses, mules, sheep, goats, turkeys, ducks, and geese. (“That was the prettiest drive of anything they drove,” a Tennessee drover said of geese. “They’d just paddle along on them webbed feet.”) Hogs, though, ruled the road. Americans raised more pigs than any other type of animal, so naturally swine crowded out other beasts on the turnpikes. The best estimates suggest that in the antebellum South, five times as many hogs were driven as all other animals combined. In 1847 one tollgate in North Carolina recorded 692 sheep, 898 cattle, 1,317 horses, and 51,753 hogs.


** This was not easy work. Whenever a roadside creek or pond appeared, the pigs flopped into the mud and commenced wallowing. The secret, one drover said, lay in not exerting too much control: “Never let a hog know he’s being driven. Just let him take his way, and keep him going in the right direction.”

** The start of the journey was especially difficult, for during that stage loud noises could send pigs stampeding back toward their home farms. One solution was to sew up their eyelids: temporarily blinded, the pigs clumped together and kept to the road by feel. At their destination, the stitch was clipped and their vision restored. (ed. note: not sure about the frequency or veracity of this “method”)


**  Driving pigs on such long journeys has been rare historically: the animals not only needed shade and tended to scatter but also required provisions en route. The swineherds of the Roman Empire were among the few to take on such challenges: tens of thousands of hogs walked well over a hundred miles to Rome from the forested regions of Campania, Samnium, and Lucania. 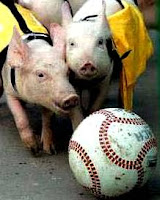 **  Pigs could walk about ten miles a day. Inns—often known as wagon stands—sprang up at ten-mile intervals along the roads, offering drovers and their pigs food and a place to sleep. At the taverns, the hogs were herded into corrals and given corn, usually eight bushels per one hundred hogs. One traveler described watching a drove of 1,000 hogs eat their evening meal: “The music made by this large number of hogs, in eating corn on a frosty night, I will never forget.”

As I mentioned before, we kids back on the farm would not have referred to the pig squeals and snorts as music, but I always thought pigs were clever and interesting. I’m just glad I never had to join in with the “great pig drives of the past.”

by dan gogerty (These excerpts come from Lesser Beasts: A Snout-to-Tail History of the Humble Pig. Droving painting pic from atlasobscura.com; pigs playing pic from adorablog.org.)
Posted by Council for Agricultural Science and Technology at 10:00 AM No comments: Links to this post