Got Milk, Got Life, Got Ads 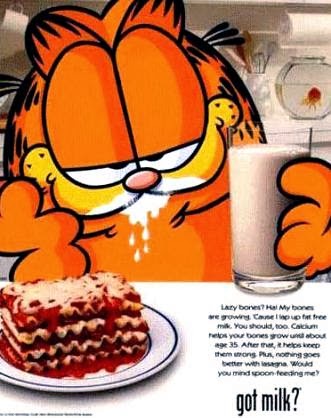 For decades the dairy industry has successfully milked the media market with its "Got Milk" campaign.

Now they are switching to a “Milk Life” campaign using action shots and cool filming techniques. With milk flying in the air and healthy folks bustin’ some moves, they emphasize the nutritional value and “hip nature” of milk.

But they still want to keep their "famous people with white mustaches" images in our minds. Celebrity endorsement overcame a sticky upper lip, and the campaign became famous.

From Beyonce to Austin Powers, stars were willing to chug the white stuff, and this site selected what they consider “31 Best Got Milk Photos.” 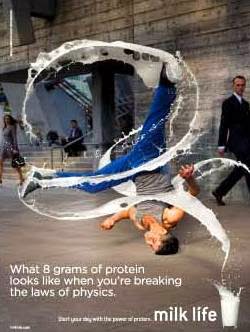 For a look at milk cows from other angles, check these blogs:

Bovine Research, Cow Emissions, and Bossy the Flatulent Guernsey
Posted by Council for Agricultural Science and Technology at 12:25 PM No comments:

I watch hundreds of ag-related articles, tweets, and blogs fly by every day. The issues often seem contentious—various views, slanted pitches, facts that can be “bent into pretzel form.” The latest dilemma comes with the hog production/PEDV disease issue. I’m sure much more will come of this in the next few days, but these three links sum up the furor at this moment:
#1 This editorial attacks confinement operations and the way pig parts are fed to other hogs to prevent PEDV.

#2 This article looks at both sides of the issue and offers several pertinent links.

#3 This piece defends hog producers and the measures they are taking to prevent PEDV.

I have to admit, I didn’t give any of this much thought back when I was growing up on a small, Midwest farm. Our pigs were basically free-range by default—sort of like they were mischievous school kids and we were caring but rather detached playground monitors.

In general I agree with the common consensus that claims pigs are intelligent. Oh sure, they would act dumb—beady eyes, gaping mouths, hours wallowing in mud and rooting in feedlot filth. But they played the game just right. They would get us to feed them corn, bed their hog house with straw, and clean their area with pitchforks and manure spreaders. And for entertainment, they cleverly figured out how to escape, and then they’d enact some type of Babe-the-squealing-pig rodeo game with us.

I can picture angry sows coming at me when I got too near their babies (this necessitated a scoop shovel or a quick hop over the fence); I recall hog droving days when we would move the herd a mile down the gravel road to Uncle Pat’s farm (pigs have a phobia about crossing bridges); and I remember when my brothers and I took care of three “runt pigs” that had been bullied to near death by the others (we raised them in a separate pen and eventually watched them board the truck for the slaughterhouse—no Wilbur-the-terrific-pig ending).

I like pigs, but I’m happy as a hog in fresh clover that I don’t have to take care of them. Dedicated pork producers have to be concerned shepherds, economic wizards, and medical assistants. When I was six or seven, Dad took me to a neighbor’s farm, and I watched in a trance as Doc Walker performed his vet magic by doing a cesarean and saving an ailing sow and several of the babies. A few years later, Doc was in our pasture with Dad and Uncle Pat, huddled over a dead 250 pounder. His field autopsy showed that a deadly nightshade weed had poisoned the animal. And years later, I returned to the farm for a visit and, with my wife and two small children, we watched my brother-in-law assist a sow that was struggling to deliver 18 baby pigs. Twelve lived.

I have a lot of respect for those who put their all into pork production, and I think farmers, food companies, and consumers will work out ways to keep hog farms safe, affordable, and humane. I’ll rely on them to figure out what’s best for the pigs. Like I said, I agree they’re intelligent, but I did my time working with them.  As Will Rogers supposedly pointed out, "You should never try and teach a pig to read for two reasons. First, it's impossible; and secondly, it annoys the hell out of the pig!"
by dan gogerty
Posted by Council for Agricultural Science and Technology at 10:08 AM No comments:


According to this report, stress can inhibit the release of oxytocin—a hormone key to the milk-releasing process. So the happiness of cows is very much on the minds of farmers. The California dairy industry even declared “Happy cheese comes from happy cows.”

Some groups recommend music as a method of getting milk cows “in the mood.” Classical music is high on the list—although I suspect the "1812 Overture" might curdle a few gallons of the white stuff before it leaves the milking parlor. The site listed above recommends songs from such diverse performers as Mozart, Aretha Franklin, REM, and Lou Reed.

I hand milked our cow years ago when the Beatles were rolling across America, so I was probably humming “Please Please Me” when I stumbled into the barn. Old Bossy was hip to the British invasion, so a few times she swatted her tail to the beat of Herman and the Hermits’ “No Milk Today.”

Modern tunes like Daft Punk’s “Get Lucky” could work on good milking days and Taylor Swift’s “Trouble” on the bad ones. But my farming soundtrack comes from the oldies, so here is a list I included in a blog a few months ago.

On good days, my music to work by may have included Simon and Garfunkel’s “Feelin’ Groovy” and the Young Rascals “It’s a Beautiful Morning,” but there were other moments on the farm when more discordant songs stuck like earworms in my head:

#1  ACDC’s “Dirty Deeds Done Dirt Cheap”  --when the spreader chain broke in the field and we pitched manure back out after having pitched it in.

#2  Sam Cooke’s “Chain Gang”  --while picking up rocks from a barren cornfield in the back forty.
#3  The Animals’ “We Gotta Get Outta This Place”  --while cleaning manure out of a neighbor’s dusty and claustrophobic chicken coop.

#4  B.B. King’s “The Thrill is Gone”  --while grabbing the last bale on the ninth hayrack load in a field of never-ending hay windrows.

#5 The Beatles’ “Hard Day’s Night”  --when driving in the final load of corn from the field, after dark on a cold October night.

#6 The Kinks’ “All Day and All of the Night”  --during farrowing time when the sows might decide any hour of the day was a good time for baby pigs.

#7 The Monkees’ “Daydream Believer”  --experienced in a trance after four hours of going back and forth on a four-row cultivator in a field with foot-high corn.

#8 Bob Dylan’s “Don’t Wanna Work on Maggie’s Farm No More”  --toward the end of a session where we held and vaccinated a hundred or more baby pigs.
.
# 9 The Easybeats “Friday on My Mind”  --especially during the later teen/car years, but it was usually “Saturday on My Mind” when the pitchforks, tractors, and feed buckets were set aside for a spell.

Note: I never did hum along with Johnny Paycheck’s “Take This Job and Shove It.” As I said above, even in my dazed and confused teen years, I knew how lucky I was to be raised on a farm.

by dan gogerty (pic from flickercushingmemorial)
Posted by Council for Agricultural Science and Technology at 9:59 AM No comments:

Bovine Paranoia--Cattle Are Out to Get Me

**  I like cows, but my images of them involve more than tail flickin' and cud chewin'. It comes from a boyhood on the farm when I battled a cantankerous milk cow and had to round up escapee steers on a regular basis. My most haunting memory comes from when the herd attacked me.

Trapped in a Far Side Cartoon

An old cottonwood tree used to be just beyond the walnut grove, on the other side of the fence and in the cow pasture. The cottonwood was stunted, a Quasimodo tree, half bent over, with large, low branches that were still alive—but barely. One day, when I was ten or eleven, I’d slipped out to the pasture for some reason, and as I walked back toward the grove the small herd of cattle charged at me. I panicked, sprinted to the cottonwood, and scrambled onto a low branch. The twenty or so steers gathered under me, milling about, swatting flies with their tails, and acting as if they might be content to stand there in the shade for the rest of the day.

For a few desperate minutes, I was in a Gary Larson Far Side cartoon. The steers were discussing how to shake me out of the tree so they could pommel me senseless with their hooves. “Did you see him scurry up the tree? He about wet himself.” Some might say the animals thought I had a bucket of corn to feed them or they were just curious. But the apologists weren’t there to see the gleam in those bovine eyes. I was trapped.

The heat was intense, and they shuffled around enough to raise a small layer of dust that floated in the still air. I yelled for help, then yelled at them, but it was soon obvious that they were having about as much fun as a 900-pound steer could have on a summer afternoon. Tails flicked; flies buzzed; I thought I saw buzzards slowly circling the scene.

The tree was close to the barbed-wire fence that separated the pasture from a nearby soybean field, so I started sliding out on the horizontal branch that was my perch. Some of the cattle were lying in the dirt by now, and if I could get to the end of the branch, I’d be near the fence. I didn’t weigh much more than a wet rag back then, but sure enough, the branch bent down earlier than I’d wanted, and I flipped into the dirt. The nearby steers jumped back, and I scrambled to the nearest fence post, climbed the strands of barbed wire, and landed with a crunch in the bean field. By the time I stood and shook the dirt off me, the cattle were calm again.

I may have had a few scrapes or bruises, but I didn’t notice as I slipped into the shade of the walnut grove and walked back to the house. It was a life-or-death scene for me, and I bounced along, floating with the relief that comes from such raw adventure. By that time, the cattle were milling about in the shade and sharing a few insights. “Well, that was fun. What next? Wanna mosey over to the mineral block or lick salt for a while?”

by dan gogerty (pic from premiumtimesnq.com)
Posted by Council for Agricultural Science and Technology at 8:57 AM No comments: