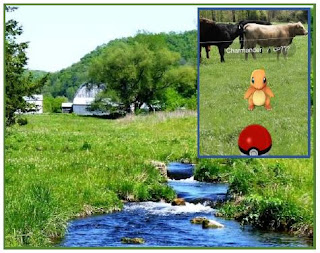 My first experiences playing Pokémon Go occurred in the late 1950s when we ran free on our Midwest farm. The only screen we accessed was the swinging door that banged shut behind us on a summer day as we charged out to search for creatures—some virtual, some frighteningly real.

Our own form of “drowzees” and “zubats” hid in the high grass along the creek, but they slithered and jumped—as snakes and frogs do. The “krabbies” in the backwater had actual pinching claws, and we called these small crab-like creatures “crawdaddies.” They made good fishing bait. Ground squirrels, muskrats, bullhead fish—the creatures we searched for were not as cute or animated as the Pokémon menagerie, but we had plenty of enthusiasm during these childhood quests.

At times I would go it alone and build a virtual world, but I was not copying Pokémon’s Ash Ketchum. I was the Lone Ranger or Davy Crockett—and yes, we did own masked-man badges and coonskin caps back then. At least these accessories did not need to be recharged at regular intervals.

Usually my siblings and I joined cousins who lived on the neighboring farm, and the outdoor environment provided its own “lure beacons”—haymows containing nesting pigeons and occasional litters of newborn kittens; shady groves filled with fleeting squirrels and low-hanging limbs to climb; and pastures lined with worn cow paths and meandering streams.

Today’s Pokémon Go might have security issues, but dangers awaited us also. Bees, wasps, and thistles had a real bite to them. Red-winged blackbirds (the original “angry birds”) protected their nests by dive bombing us, and we always gave skunks a wide berth. You could “swipe” all day after getting sprayed by them, and you’d never dodge the stink.

Our ultimate “Poke Stop” came on days when we hiked farther downstream—past Crow Hill, through neighboring fields, and to the beaver dam area. Occasionally we’d hear tails slap on water or see the creatures leave a wake across the still surface behind the dam. Usually we just examined their construction techniques and wondered at the type of front teeth needed to gnaw down small trees.

As we grew older, we “leveled up” and changed more to team play. We didn’t battle “gym leaders” but instead chose sides for baseball, football, or steal-the-flag. And we didn’t gain “badges.” We were content to outscore or outrun a cousin or brother. The competition might be called on account of fights, chores, or darkness—but we never had to pay for upgrades, and our batteries always seemed charged.

Most of our farm-kid Pokémon Go activities ended as we became adults, but old photos and nostalgic flashbacks can take me back to those free-range days. I've conveniently forgotten about poison ivy, severe sunburn, or being shoved into the creek by a feisty cousin. Anyway, I guess that’s better than walking into a creek while staring in a stupor at a “smart” phone screen.

by dan gogerty (images from celestelaurent.com and rxflyfishing.com)
Posted by Council for Agricultural Science and Technology at 3:15 PM No comments: Links to this post

Grills, Road Trips, and 250 Pounds of Live Bacon on the Hoof 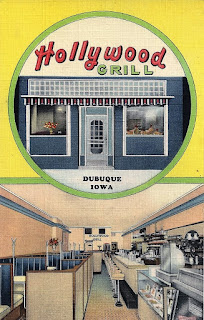 “When we were kids, a grill was the front of a car,” says Dad. “You’d know if it was a Chevy, Plymouth, or Ford when it came down the road by the look of its grill.” He reckons some eating establishments in the late 1930s started using the term for business names. The Hollywood Grill in Dubuque, Iowa, started “grillin’” even earlier—the Mississippi River restaurant was “famous for its baked ham” as far back as 1914.

Modern grilling really took off in the 1950s, with Weber models and the earliest gas grills. But according to Dad, folks had their own type of open-fire methods in the days when the country had “nothing to fear but fear itself.”

“People cooked out over a fire made from sticks or other material at hand—my dad might bring along a sack of cobs. They’d cook up hot dogs, and if they were splurging on an overnight camping trip, they might even have store-bought buns. They’d also take pints of whiskey in brown bags or a few bottles of Hamms. For dessert, they’d ‘grill’ marshmallows on a stick.”

Many of the locals liked to camp by a river or lake so they could cook fish on the open fire. “We kids would help string ‘set lines’ across the channel—six to ten hooks dangling into the water, baited with minnows. Dad figured the lines were ‘marginally legal.’ He and my uncles knew the local game wardens or knew how to avoid them.” Even with the fish, there did not seem to be much real grilling back then. They usually fried up the catfish or carp in huge skillets on the open flame. 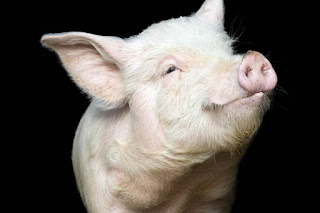 Some of the most adventurous open-fire cooking took place on trips. In the 1920s Dad’s grandparents made several 5-day road trips from Iowa to California, and they’d stoke up the flames at various stops along Route 66. Fried chicken was a favorite on the road because it would keep at room temperature longer—those were the days before “use by” labels decorated the side of any food package. “Granny made pancakes over a fire every morning,” Dad said. “But they did occasionally stop at diners before they made it to the orange groves of California.”

Backyard grilling has become a religion in America, but the open-fire cooking of the past seemed more mobile. Folks would stop at roadside parks or in a farmer’s pasture to camp and light up a fire. “Most farmers were fine with it,” said Dad. “But old Art over on Highway 65 eventually grew tired of picking up trash and empty bottles in his grove, so he released a herd of hogs in the pasture.” Evidently, pork chop on a stick is fine, but 250 pounds of live bacon on the hoof rooting around your tent is not so appealing.

by dan gogerty (top photo from photolibrariandubuqueiowa)
Posted by Council for Agricultural Science and Technology at 12:43 PM No comments: Links to this post

According to writer Megan Molteni, scientists engineered goats whose milk could save thousands of poor children's lives. But a world wary of GMOs is not ready.


Excerpts from Molteni's article: Over the course of nearly two decades, scientists at the University of California-Davis have worked tirelessly to demonstrate that the milk from their goats is both safe and effective, but the researchers have run headlong into the pitched, prolonged, and--critics would argue--misguided first-world debate over genetically modified organisms. It’s a conflict animated in large part by a rapidly evolving arsenal of genetic engineering tools and the inability of both policymakers and the public to quickly and effectively make sense of it all--or even to apprehend the full spectrum of motivations for manipulating genes, from the mercenary and commercial to the humanitarian. This has left the UC-Davis goats, along with a host of other transgenic animals with the potential to curb disease and save lives, in a regulatory limbo--even as other genetically engineered organisms, from corn to fish, earn regulatory approval.

“Regulation is important, and looking at these things carefully is necessary,” says Alison Van Eenennaam, an animal geneticist who works with the UC-Davis team and has been outspoken about the scientific community’s frustrations with the regulatory apparatus. “But not at the exclusion of all innovation, ever.” Particularly not those innovations, Van Eenennaam adds, that might well prevent millions of unnecessary deaths by diarrhea.

**CRISPR, a technology that can edit DNA with remarkable precision, has the potential to change human lives forever. This video looks at the method, but the controversies are swirling about the implications of such a scientific leap. Many are excited about the possibilities, while others are more cautious.

**Humans with Wings
BASE jumping is cool, and wingsuits are technologically amazing, but jumping off a ledge and then spreading your synthetic wings to take flight over a beautiful Swiss mountain vista is still scary.

**Black Ice Cream for a Summer Treat
As this video indicates, this summer’s food craze in New York City appears to be black ice cream—delicious but messy.

Posted by Council for Agricultural Science and Technology at 12:25 PM No comments: Links to this post