Living Past 100--Sushi, Horses, and Wine

Update July 2015:
The world's oldest man, a retired educator from Japan, has died at the age of 112. The oldest woman lives in Brooklyn.

November 2014:
A new study of supercentenarians says that the world’s oldest people share no genetic secrets. So it's all down to eat, drink, be merry--with heavy doses of common sense and a dash of luck.

June 2014:
The oldest man (officially) has passed on--this video shows he was alert, funny, and curious about life. Like many, he attributed his long life to diet, exercise, and nutrition--and a love of ice cream.

Sushi, Horses, and a Glass of Wine

I’ve decided the secret to a long life is to grow up to be a cute little old lady in Okinawa. I’ll have to work on it pretty hard since I’m an aging man in Iowa who has never been called cute, but if it adds decades to my life, maybe it’s worth a try.

Okinawan Misao Okawa turned 116 recently, and she celebrated by digging into a white cake decorated with strawberries and candles. If the translator got it right, she responded with a “kind of” when asked if she was happy to reach such an age. As we age, none of us is too bubbly about added candles on the cake, so I’ll take it as a “yes.” She credits a healthy appetite and getting plenty of rest for her longevity. She also enjoys sashimi.

For several years, my plan of becoming a centenarian from Okinawa had potential. My family and I lived and worked in Tokyo, and sashimi shops were as prevalent as pizza joints are in my current surroundings. I could handle most of the fare except “uni,” something scraped from sea urchins and considered a delicacy. I could get a bit of it down if I used plenty of wasebi and Japanese beer. If that’s an ingredient for long life, I might have to cash it in early.

Our west Tokyo neighborhood also included an Okinawa restaurant. Tofu, pork, and egg dishes were available, but the common denominator was a vegetable called “goya.” The nubby, green gourd has a distinctly bitter flavor, and it is apparently loaded with vitamin C and other nutrients. It seemed OK grilled (I like most anything grilled), but once again, I couldn’t see this as my key to longevity.

Maybe I need to cross reference. I recently saw a video of a Texas rancher who still actively kicks around the farm as he turned 100. And a neighbor woman here in Iowa had her 100th birthday a few months back. She likes a glass of Chardonnay on the porch each afternoon.

So that might be it. Common sense, healthy eating; plenty of exercise and activity; and a steady dash of enjoyment, occasionally with a glass in hand. Who would have guessed?

by dan gogerty (photo, reuters.com)
Posted by Council for Agricultural Science and Technology at 10:47 AM No comments: Links to this post


Over the years our family has developed a Memorial Day tradition that involves a short road trip, cross generational sharing, and an analog twist on digital media. The tweets are obscure epitaphs chiseled in stone and the blog entries are graveside conversations. We're not organized like several online genealogical services. We’re more like a family Wikihistory—a bit fuzzy, receptive to rewrites, but easy to access.

We have relatives buried in four country cemeteries within a twenty mile radius of the home farm, so those free on Memorial Day hop in a few vehicles to make the pilgrimage. My brother Tom keeps the old headstones cleaned, and Dad has his own built-in GPS memory of where the sites are located. In some cases, the inscriptions are faint and the headstones might sit in lonely graveyards miles from the nearest small town. At age 87, Dad is the wikihistorian, and he generally starts spinning the family yarns each year. 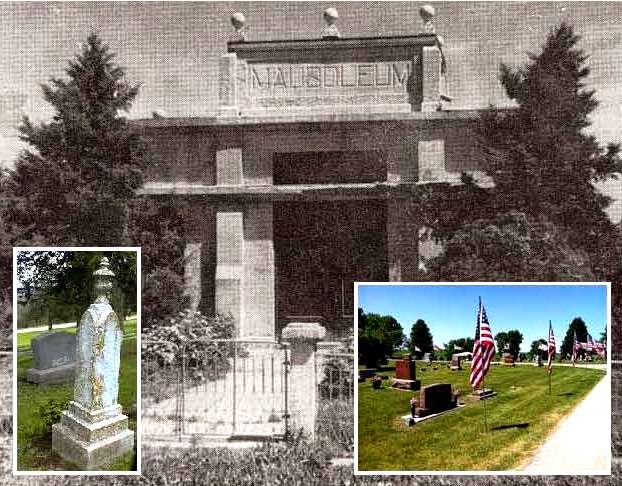 It’s only fitting to start with a military veteran on Memorial Day, so we usually visit the Hubbard Cemetery first. The family patriarch, Bernard, has a Civil War veteran’s marker near his headstone, and by this stage most of us know the basics. He was one of the first to set up a farm on the flatlands of central Iowa before a raging prairie fire sent him and his small family back to Pennsylvania where he joined the Union army. We’re not sure how much time he spent fighting, drinking, or using his skills at cabinet making, but a few years later he, his wife, and a growing number of kids were back on the farm. This is when we usually add varied bits about his son Dave who survived a rattlesnake bite, his son Berry who became the good time drinker of the county, and his wife Lydia who held together a growing family on a hard-scrabble farm.

Ten miles away, a few distant relatives in the Bevins Grove Cemetery have stones so worn we can’t read most of the information, but that doesn’t stop us from making conjectures and trying to piece together some details. We discuss the usual profound questions of heritage, but sometimes we wander off a bit: "You mean Great Aunt Tess? Wasn't she the one with the blond mustache?" I ask.

"That was Aunt Mildred," says my sister. "She was very neat and proper, but she believed you shouldn't mess with what God gives you."

Mom joins in. "My Grandma Regan had the best facial hair. We kids thought it looked like a goatee."

The family's inner circle members are buried in the Zearing Cemetery, a pretty spot that includes a mausoleum--a cold stone building that has been refurbished and has lost the Edgar Allan Poe aura it had when we were young. As eight-year-olds, we believed the rumor that a kid had been locked in there overnight by bullies and he came out stark raving mad.

Grandpa and Grandma need no introductions for us, but Dad usually repeats anecdotes about clan members like his Aunt Ida. She was born in 1900, and her headstone makes it clear she died at age nine. Burst appendix. Apparently the kids in her fourth-grade class placed a vase and flower on her desk for the remainder of the semester. Someone added a “you’ll be missed” note. In country cemeteries it doesn’t take long to find headstones with sad messages of 140 characters or less indicating a child resides there. The faded hashtags might be the names of a disease—cholera, diphtheria, whooping cough.

On the odd occasion we make it further afield to the Cambridge burial spot, we catch up with the Ryans—Granny Faye’s bunch. Apparently several of them participated in the Civil War. Faye’s grandpa, Dan Ryan, watched his uncle and older brother enlist, so at the age of fourteen, he lied his way into the army. He probably grew up fast; records show that he was along with the scorched earth tour General Sherman led as he marched to the sea. Could have been worse—Dan’s uncle spent time in the notorious Andersonville Prison. At the ripe old age of nineteen, Dan settled down in Iowa where he and his wife, Clementine, had eight children. They must have been a fast-working pair, because Clementine passed away at age thirty-one. Dan was left with his own army to organize.

At least I think that’s right. We pass on these stories repeatedly, sometimes depending on who’s present and how many bottles of Guinness get opened. Most of our family history is written down somewhere, but there’s something spiritual—and entertaining—about stories that float along orally at gravesides. The process works best when family members of all ages are present. The elders tell what they know, the younger ones ask questions, and the ghosts of generations past hover but never interrupt. Hashtag: honoring our ancestors.

Posted by Council for Agricultural Science and Technology at 10:01 AM No comments: Links to this post

Getting Students to Eat Healthy Not Trash Healthy:  This new study says that one simple change--holding recess before lunchtime—can increase fruit and vegetable consumption by students.

Cupcake Amnesty?  A Texas official says the sugary snacks are allowed at school parties--as opposed to the Agriculture Department policy restricting the snacks at public schools.

According to a new report, school kids are in a bind about a few cafeteria items, including the milk dilemma. Since some schools are cutting out chocolate milk to lower sugar intake, students are not drinking as much milk. They must have been “Got Chocolate Milk” fans. 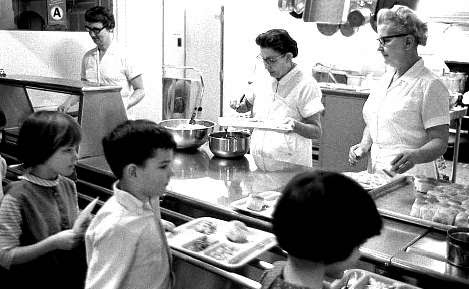 Even decades ago when we grabbed our plastic trays in my fifth-grade school days, the lunchroom had a milk problem. The milk issue stemmed from the fact that sometimes the milk hadn’t been kept cold enough or it was WWI surplus or something—it was curdled. I’m against having to strain my milk before drinking it. The little cartons had wax on the outside, so they were fun to play with, but at every table, at least one kid apparently couldn’t read yet, because he’d open the side that said “open other side,” and he was certain to cause a milk spill—usually non toxic, but it depended on how curdled it was.

The news article says modern school cafeterias are figuring out better ways to get kids to eat healthy. They might name the food “x-ray peas” or “crunchy carrots.”  Ours would have been “pasty peas” and “soggy celery.” And schools now place fresh fruit within easy reach. We grew up in fertile farm country, but many probably thought fruit only came in a can, where it was covered with some type of syrup.

Not that our cafeteria crew didn’t try—they were doing what they could in the era before labels, calorie counts, and television celebrity nutritionists. They must have been handed a year’s supply of macaroni and cheese, with a weekly dose of limp fish sticks.

Most kids loved hot dog day because we never wondered what they were made of, and no one asked for gluten-free or even peanut-free food—“choice” was not part of the English language in that cafeteria. That didn’t bother us because we had bigger issues at hand. The goal was to get out of the lunchroom without an older kid giving you a friendly nuggie on the noggin’ or a not-so-friendly “underwear wedgie” if you happened to bend over to pick up a dropped fork.

I like the “eat healthy” movement, but it could take a while to get things figured out. Different interest groups and political factions will probably use food to score points or make a profit, but the kids are the key. Whether it be milk, sugar, or protein, the various groups and government officials should figure out what’s best. Otherwise, it’s time to serve them up something that several of us fifth-graders ate on occasion when a classmate placed mashed potatoes on our chair—humble pie.