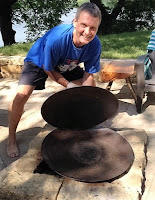 When Aaron Rogers wanted a big cooking platter for the hot coals in his patio pit, he combined two cultural influences to form his creation. Aaron and his wife teach at an international school in Tokyo, and he figured a type of Asian wok would work for the outdoor recipes he had in mind. For the materials, he pulled from his farm roots. His cooking device comes from the disk blades that had once cut through rich Midwest soil.

Aaron and his family spend the summer months along a lake in Minnesota, and they enjoy cooking outside—sometimes for a big gathering. “I can throw 13 or more pork chops on at once,” said Aaron. “Or we can toss in beef and broccoli stir fry ingredients and let it bubble until it’s ready.”

A friend welded metal plugs into the center holes of two disk blades—one larger than the other, so the smaller one works as a lid. A welded-on horse shoe provides a handle, and the metal radiates a steady heat that cooks evenly. 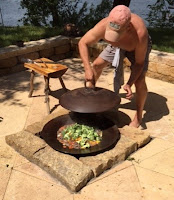 “We’ve even made a wok breakfast with a mass of bacon and eggs cooked to perfection,” said Aaron. He sanded a bit of the sharp edge off the disk blade, but in most respects the cooker is low maintenance. “It’s easy to wipe out clean, but it’s not so simple to move. A bit like a weight-lifting session to get it back in the garage.”

The Rogers’ lakeside home is filled with Japanese artifacts and Midwest heritage; Aaron used part of the barn door from his childhood home to make a display in one room. So it is not surprising that he mixed cultures to satisfy the most basic need: eating. After all, whether it be sukiyaki or prime steak, everything tastes better when cooked over open coals.

by dan gogerty
Posted by Council for Agricultural Science and Technology at 8:00 AM No comments: Links to this post

Supermoons, Lunar Phenomena, and Burning Down the House

Take in some great photos of the supermoon from the United States and around the world.

Note: Full Moon Summer Solstice (from June)
June 20 was the longest day of the year, the summer solstice, and for the first time in decades, it included a view of the full moon.  As this video shows, two astronomical phenomena occurred at the same time.

**The moon can be mesmerizing during any season...


Burning Down the House--Moon Style

On a few rare, beautiful occasions, the rising summer moon has set my brother’s house on fire. It happens only when I stand on my parents’ front lawn, and even then, the moon has to be in the perfect phase. 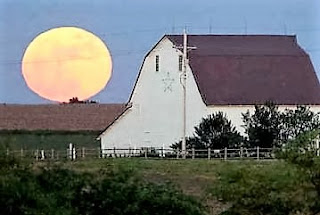 My brother and his family live up the quarter-mile lane and across the road from my childhood home. Whenever possible—especially in summertime—I catch the moon rising over lush fields, rolling hills, and a meandering creek that dissects the gravel lane. On certain nights just after the full moon, its lunar path has shifted a bit, and it rises later behind my brother’s farm directly to the east. If enough field dust permeates the air or a trace of thin cloud hovers in the right spot on the horizon, the moon glows like flame behind the dark silhouette of the house.

The moon was full late last summer when I drove to the farm to confirm that the magic is still there: yellow-tinted waves ripple in the cornfields, golden reflections bounce off the cottonwood leaves, and a lone blue heron rises from the creek, slowly winging to a spot downstream as it hunts in the moonlight.

From mythological epics to top-40 love songs, the moon has worked its way into our folklore, and farmers have looked to it for guidance and signs of luck throughout history. Some plant garden vegetables by its light, old-timers claim horses and other animals “act strange,” and fishermen like to tell a few whoppers about casting to the light of the moon.

Dad claims his Uncle Frank used to schedule jobs ranging from planting pumpkins to working with his livestock according to the sign of the moon. “His garden was always one of the best in central Iowa, and his lambs consistently brought home blue ribbons from the county fair.”

Still quoting Frank, Dad’s tone seems tinged more with Star Wars Jedi “force” than Farmer’s Almanac folklore. “Frank said the natural influence of the moon is moist, cooling, attractive, and magnetic, in contrast to the sun’s fiery, drying force. The old-timers couldn’t explain how the moon influences earthly goings-on, although they did point out that the moon creates land tides as well as ocean tides.”

Some say the full moon brings on insomnia, insanity, and lycanthropy. Others claim it affects young lovers, hospital emergency wards, and restless dogs. I’ll leave that to the experts and rumor-mongers. All I know is that on a moonlit summer night on the farm, you can imagine a mist of silver surfers floating lightly along the tops of the corn as the moon spins its magic.

by dan gogerty (pic from washingtonpost.com)

Posted by Council for Agricultural Science and Technology at 12:18 PM No comments: Links to this post