The Sanctity of Pre-digital Snow Days 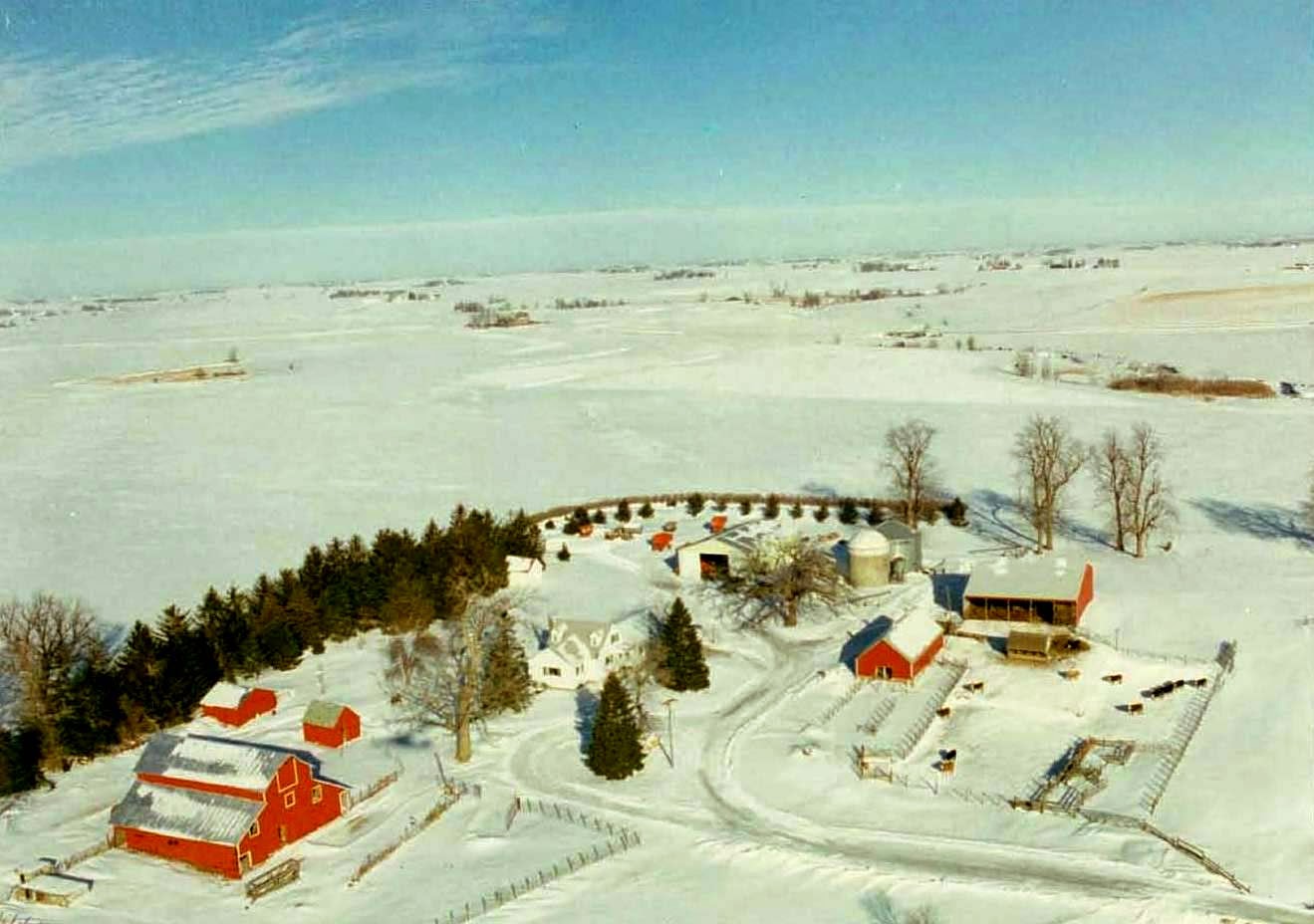 I grew up on a Midwest farm in an era when the only telecommuting occurred in the Asimov and Bradbury books I had stacked on the floor near my bed. When a blizzard hit, we were stuck (or happily exiled) on the home place--no work or school online. So I was saddened last year when I read an article about workers who basically must log on, sit in front of a computer, and work from home even on an official snow day.

Pre-digital days on the farm were different. It was magic to hear that school was cancelled and the yellow bus would not be sliding down the gravel roads to snatch us away. Mom only tolerated our version of "flipping a house" for so long until she accessed her "cabin fever app"--the front door. She bundled us up in snow suits and boots--and sent us out into the winter wonderland of a farm with creeks, barns, and sledding hills. The fun but frigid details are in this blog.

As we grew older, a snow day on the farm meant a bit more work, and many farmers today face tough conditions if the weather has gone arctic--this article says that "regardless of what temperature it is, farmers need to milk cows, feed, livestock, and do all the other routine barn work on a daily basis." In the past, such winter work could be even more challenging. Dad recalls an old timer who told him, "My mustache stayed frozen all winter." This blog looks at "A Cold Taste of the Hard Work That Came with the Good Old Days."

Posted by Council for Agricultural Science and Technology at 9:29 AM No comments: Links to this post 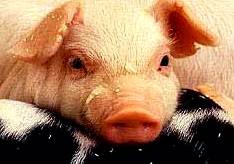 My hog farming days are far in the past, but my memories contain snapshots of newborn pigs under the glow of a heat lamp, escaped pigs that turned us kids into juvenile Keystone Cops, and Saturday poo pitchin' sessions that had me wondering if I'd make it out of my teen years without a certain manure scratch-and-sniff label attached to me.

(1) Let's start with a rather contentious one:  An Indiana confinement dispute symbolizes the struggle between industrial hog farms and folks in the neighborhood. And this blog provides more articles and commentary about the debates involving hog production practices.

(2) Odor seems to play a major role in pig talk. A team of Iowa State University Extension and Outreach specialists has developed an online tool to help livestock and poultry producers compare odor mitigation techniques that could be useful on their farms. 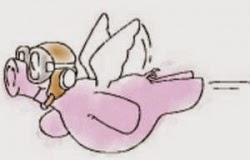 (4)  And with the Super Bowl coming soon, an advertisement featuring a flying pig does not seem out of the ordinary. In this one, a farm kid will do anything for a Dorrito--including sending a pig airborne.

I like pigs, but I’m happy as a hog in fresh clover that I don't have to take care of them. I have a lot of respect for those who put their all into pork production, and I think farmers, food companies, and consumers will work out ways to keep hog farms safe, affordable, and humane. I’ll rely on them to figure out what’s best for the pigs.

Like I said, I agree pigs are intelligent (see this article about pigs that high dive, drink beer, and play with toys), but I did my time working with them.  As Will Rogers supposedly pointed out, "You should never try and teach a pig to read for two reasons. First, it's impossible; and secondly, it annoys the hell out of the pig!"

by dan gogerty  (top pic from ars/usda and bottom one from squidoo.com)
Posted by Council for Agricultural Science and Technology at 12:03 PM No comments: Links to this post

Auctioneers--Cryin' Out a Sale in Barns and Online

2018 Update:  Auctioneers still need speed, stamina, and livestock savvy to do the job. This video from several years ago show several champion auctioneers in action.

Barn Sale Memories: This sixth generation farmer recalls attending barn sales with her dad, and she now sees the ranchers as one giant community where everyone is watching out for each other.

Rappin' Out a Sale: Check this short video to catch a cattle auctioneer with a bit of "rap, rhythm, and rhyme" thrown in. 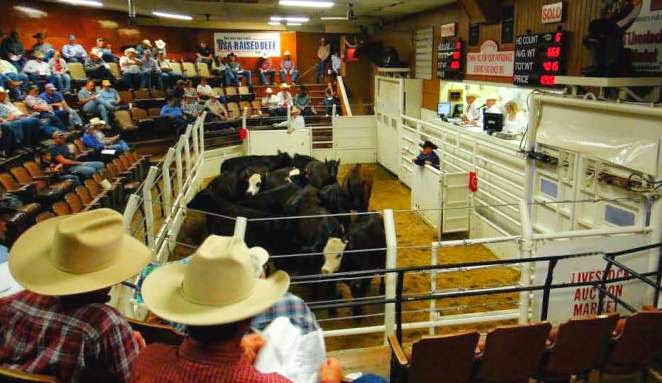 Some livestock auctioneers have added an online audience to their ringside performance with as many as 10,000 potential bidders logging on, but a skilled voice still makes the difference. Good auctioneers have a “signature chant”—individual rhythms and tones help them coax buyers and bring up the bid. Like the digital world, the cry has a binary scheme to it. Auctioneers repeat two numbers—the current bid and the next desired price—and they add filler words to tie the chant together.
When Dedicated Lines Were Rope;
When Digital Mode Meant Finger Action
In days gone by, those hypnotic cadences rang out in sale barns filled with restless cattle, tobacco-chewin’ farmers, and local women selling meals along with “some of the best darn pie you’ll ever find.” The business end was handled by “clipboard bankers,” and they might send their receipts along a clothesline-pulley system so the transactions could be recorded—a type of dedicated line for the analog age.
Dad has firsthand knowledge of that era since his father—everyone called him Pappy—was an auctioneer. “Good ones knew how to work the crowd,” says Dad. “Pappy had a sense of humor and an easy-going style. He started at his uncle’s sale barn in Zearing, auctioning off anything from hogs to turkeys, and maybe a few geese somebody had in a burlap bag. And local farmers might herd in cattle, sell them off, and then help move them to the train station several blocks away. Townsfolk put up with a few cow pies on the potholed streets.” 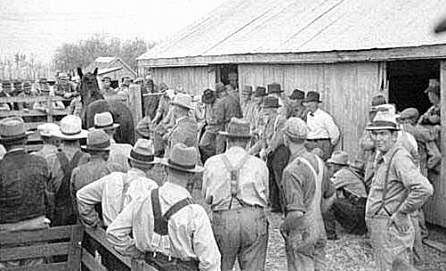 Back then, the only digital aspect came when buyers lifted fingers to bid, and the social media interaction was in the form of gestures, grunts, and the daily chit-chat that fueled rural towns. A thin cloud of cigarette smoke and dust might hover above the ring, but the auctioneer kept his voice flowing and the sale moving. A few skinny hogs became “pork chops on the hoof ready to fatten up.” It could be tough putting lipstick on a pig, so they used body language and smooth tongues to emphasize an animal’s positive aspects—sort of like digitally enhancing a photo, but in this case it was verbally hypnotizing the buyer.

Dad says, “Most auctioneers also did house and farm sales, and they thought it was better to have a cold, dreary day in the front yard. It would cut down on the chatter and get sales going.”
Apparently Pappy had another method to keep things rolling during winter sale days. He kept a flask of whiskey in a hidden pocket of his raccoon fur coat. “A bit of antifreeze courtesy of the bootleggers back in prohibition times.”
Pappy was a cattleman at heart, and I imagine he preferred doing livestock sales rather than house or farm foreclosures. “He was good with people and with cattle,” Dad says. “He knew how to keep the crowd interested and the bids flowing.”
That couldn’t have been easy at times. “I heard about an old boy named Junior,” Dad said. “He’d slouch on a bench in the stands, seemingly asleep the whole day, but by the end of the sale, he’d bought a truckload of cattle—usually ones nobody else wanted. When sick, lame, or skinny steers came into the ring, usually somebody would mumble ‘better wake up Junior.’”
Whether it involves eager buyers with laptops or drowsy “Juniors” in the stands, it takes a certain gift of the gab to be a successful auctioneer. Times change, but the traditional auction cry still echoes from sale barns across the country.
by dan gogerty (top pic from outbacknotes.blogspot.com; bottom pic from web.missouri.edu)
Posted by Council for Agricultural Science and Technology at 7:23 AM No comments: Links to this post