GM Salmon Story is More Than a Fish Tale

When we fished the farm creek in the early '60s, we were after bullheads and chubs, and I doubt any of us pre-teens would have known how to spell "salmon," let alone catch one. We definitely would not have understood genetic modification, and I don't recall Flash Gordon cloning much of anything in the early science fiction I read by the glow of the night-light back then.
But looking back on it, I think we did have clones and GM fish. The chubs all looked alike--shiny, small, and void of any personality, like minnows on steroids. We threw them back as soon as we could get the hooks removed. We older kids would then thread a freshly dug night crawler onto a barb for the little ones and toss our cork bobbers into a deeper area by a fallen tree or on a bend in the pasture. We wanted to catch our version of frankenfish. To a ten-year-old, bullheads had to be the result of genetic modification: oily skin, flat heads with sinister eyes, and stingers ready to paralyze careless kids.


We only caught a few bullheads and none of us was stung. Bee stings, poison ivy, and wayward hooks were more treacherous. Mom wasn't much interested in cooking up the remains of the day either. We lived in hog and cattle country, so fish was not one of our basic food groups. 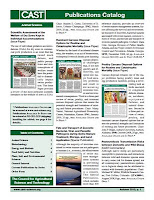 Fish is a huge part of the worldwide food system, however, and the current debate about GM salmon gives us a taste of the growing controversies in the food production complex. People need to eat: growing populations, finite arable land, and changing climate patterns equal a global need for food. But environmental issues and uncertainties about health keep many from jumping on the GM bandwagon. The GM salmon controversy could be headed in the same direction that many other ag-issues have gone: shoddy research, bold generalizations, and superficial discussions leading to polarized groups and unsatisfactory policy.

Most of us are eating GM plants now, and that brings up other actively debated topics. From nutritional issues to climate concerns, the nature of farming and food production is constantly discussed, questioned, and defended. The Council for Agricultural Science and Technology (CAST) believes that the best way to handle this is to be informed, do the research, stay objective, and use a science-based, thoughtful approach to solving the challenges that confront us. Here are some ways to accomplish that.

CAST publishes papers dealing with these and other issues; click HERE for the Publications Catalog. CAST also provides a wide variety of news links in its Friday Notes, a weekly newsletter released to members.
In the murky waters of the various media outlets, we encourage patient and thoughtful "fishing for answers." I would say something about CASTing for the most enlightening publications, but that type of pun is definitely one worthy of being thrown back in the water.  Dan Gogerty, CAST Asst. Ed.


Posted by Council for Agricultural Science and Technology at 11:48 AM No comments: Links to this post

On Monday, September 13,  Dr. John Bonner of CAST hosted a morning event in the United States Department of Agriculture Whitten Building with Dr. Jerry Fruin presenting the latest installment of CAST's series regarding the convergence of agriculture and energy. The fourth paper, Infrastructure Considerations for Biomass Harvest, Transportation, and Storage, focuses on the logistics needed to make the biofuels program a success. To access this paper, click HERE.
CAST sponsored a second event at noon, a "Lunch-N-Learn" seminar presented by NC-FAR.  Dr. Fruin covered key points from the paper regarding the specifics of harvest, transportation, and storage in the biofuels chain. Because many think biomass crops and residue will largely replace fossil fuels, the logistics of how best to perform the process are crucial. Dr. Fruin and his team used data and case studies to look at possible solutions for the planning, design, management, and operation of the biomass infrastructure. News Release
Posted by Council for Agricultural Science and Technology at 10:49 AM No comments: Links to this post