Gotta Get a Fitbit for Bossy the Cow

Fitbit for Cows to Debut at National Western Stock Show

A famous Texas cow will be wearing a tag (type of bovine fitbit) at the show, but more importantly for the future, if a rancher is standing in a field, he or she simply taps the icon on the cellphone that reflects the numbered tag of the cow being monitored, and information on that cow appears. New algorithms are being developed almost weekly, including those that will measure how often a cow is eating, chewing and swallowing, or ruminating as they say in the ag world.

What? Your Cow Doesn't Have a Wearable Device!? 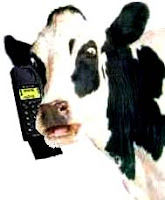 I don't even know a close friend who wears a Fitbit--the folks I hang around with are only "a bit fit." But apparently fitness monitors are getting popular, so I guess the bovine crowd needs to keep up with the trends. These links and observations should get you caught up with the basics of wearable tech for the cattle in your life.

According to Inside Science, researchers hope wearable fitness monitors can help keep herds of beef cows healthy. An epidemiologist at the University of Calgary in Canada is testing how accelerometers--the same devices inside fitness monitors that measure a person's activity level--can be used to detect disease in beef cattle before it becomes obvious to ranchers.  The Moo Monitor tracks the activity and health of a cow--and it apparently keeps track of a cow's fertility and hormonal cycle, information that can be used to more effectively breed cows.


A Fitbit for Bossy? 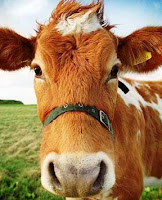 So... we can get devices to keep track of the cow’s fertility and hormonal cycle—apparently this leads to a higher rate of successful pregnancies. A bit invasive but helpful, no doubt.

We only had one milk cow on our farm, but the old Guernsey communicated just fine without tech. If she didn’t like the way I was squeezing out the milk, she swung a mud and manure tinged tail at my head while I sat milking on the three-legged stool.

No way I would have ever pried into details about her sex life.

by dan gogerty (top pic from satirewire.com)
Posted by Council for Agricultural Science and Technology at 11:41 AM 1 comment: Links to this post


Dad reckons fencing in the Midwest has become a lost art. “Baling wire, panels, and electric wire are used to patch up problem areas. Only a few seasoned fence builders know how to stretch wire and brace it with wooden and steel posts set in a straight line for 80 rods.”

Fencing used to be essential--and maybe even dangerous. When I was seven years old, Dad nearly lost a finger while coming down hard with a steel post mall. He kept the bloody mass in his leather glove he was wearing, Mom drove him to town, and Doc Hall stitched it up—without using baling wire or duct tape, I presume.

“Before mechanized help, we pounded posts with a mall and dug holes with muscle. Hard dirt and rocks made it tough, and pasture creeks offered special challenges.” Dad and his brother Pat kept up the practices left to them by Grandpa: barbed wire field fences held cattle in pastures and out of the corn; boards on feedlot fences were nailed on tight and painted white by us Tom Sawyer kids on hot summer days; and woven wire fences gave the pigs something to match wits with—they sometimes won, and we spent plenty of time rounding up wayward livestock.

For some farmers, fences were a source of pride bordering on obsession. “Our neighbor Ambrose had the ultimate fence,” Dad tells me. “It was hog-tight around his 160-acre farm. Three barbs above 36-inch-high woven wire attached to creosoted wooden posts interspaced with two or three steel posts. This allowed him to graze cattle, hogs, or sheep in any field on the farm.” 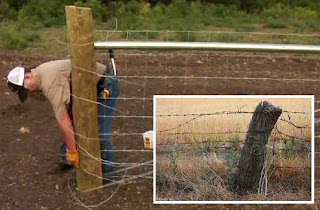 Confinement livestock practices and wall-to-wall crop planting changed things in much of the Midwest. “Fences have fallen down,” says Dad. “Drifted over by blowing dirt and bulldozed out by farmers, fences are considered nuisances. They harbor weeds, drift snow, and snag field equipment.”

In his poem “Mending Wall,” Robert Frost uses the line “good fences make good neighbors” in folksy and ironic ways. Two neighboring farmers tend to a rock wall that sets the boundary for their property. As Dad recalls, “Fences could be meeting places for farmers in the fields. We’d stop our planters or cultivators to visit for a spell. Nowadays the renter might wave from an air-conditioned cab atop a monster tractor.”

by dan gogerty, with thanks to Rex Gogerty (pig pic from organicgrowersschool.org; collage from youtube.com)
Posted by Council for Agricultural Science and Technology at 3:16 PM 1 comment: Links to this post