June 6, 2014, Update:
Apparently, "sushi diplomacy" has not yet worked. According to this report, pork producers at the World Pork Expo made it clear this week they are not going to budge when it comes to getting better market access to Japan as part of the Trans Pacific Partnership talks.

In the story below, I recommended that President Obama should conduct his negotiations in neighborhood establishments when he visited there this spring--as this article states, he began his Asia tour with informal sushi diplomacy in Tokyo.


I know broad trade agreements are tough, but I still think I could help with the sticking points. White House aides didn’t call me for advice, but if asked, I would suggest a return trip that includes some stops with the locals that might help fix the problems.

My suggestion? I would take the president to three sushi shops in west Tokyo. Sure, the city has many historic sites and important diplomatic contact points, but we lived in that part of the capital city for 17 years, and something about these three spots makes me think President Obama and Prime Minister Abe could figure things out.

Trust has been lacking in the trade battles between Japan and the United States for decades, so a stop at Kosan’s restaurant might help. It is a small sushi-ya located in a wooden building across from the Tama Train Station. The bar has room for five patrons and the three tables accommodate more on busy nights, but the pace is usually slow—smoke rising from the tiny grill, small glasses of beer on the tables, the owner preparing sashimi from the day’s fish. My teacher friend Kevin went there often (he was young and unmarried), and even though his Japanese language skills were limited, he occasionally took over the restaurant. The owner would receive a call for take-out, hop on his 125-cc motorcycle, and leave Kevin in charge. Even with a language barrier, they worked it out. 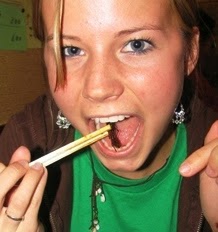 Creativity could help the TPP talks. The two nations have been stuck in “Groundhog Day” trade barrier situations for years—maybe they could try something new. The Yorimichi Restaurant sits three blocks from Koyama’s. It is a bustling “salaryman” watering hole, with plumes of smoke coming off the grill and menu fare ranging from sushi to grilled chicken (every part of the chicken). It was noisy and smoky, but we took our kids there several times—the ambience and food were both edgy and interesting. One evening, the businessmen at the table next to us decided we should try something new, so they shared their stir-fried glazed grasshoppers with us (crunchy, sweet, and surprisingly tasty). On another occasion, three locals who had been fishing in Tokyo Bay walked in wearing boots and carrying a huge fish they’d just caught. They plopped it on a table, washed it, sliced it up, and we had ultra-fresh sashimi. Of course risks are involved, but maybe trade negotiators should explore different avenues.

Bilateral understanding isn’t easy, but the third stop on my suggested itinerary would help. We often went to Tsuchiya’s Sushi Shop. The “master” of the place bought fresh fish at the famous Tsukiji Fish Market daily, and he would explain the intricacies of taste and preparation as he served us at the tiny wooden bar. He and his wife spoke some English, and during the ensuing years, they became good friends with several teachers at our school. They were obsessed with the American “Wild West” and have visited friends in the mountains of Montana on several occasions. Mrs. Tsuchiya also works in the restaurant, but ironically she can’t stand eating fish. “I love the food when I visit America,” she said. “Beef is my favorite.”

I have a feeling President Obama would enjoy my itinerary more than the stops he had on his schedule, and I also think Prime Minister Abe should visit several eating establishments I could recommend here in Iowa. If world leaders could speak with the folks who produce the food, problems might not be so messy.  Then again, with the President using chopsticks to pick up glazed grasshoppers and the Prime Minister handling an ear of buttered sweet corn, we could really have a bilateral mess on our hands.

Posted by Council for Agricultural Science and Technology at 9:06 AM No comments: Links to this post


Ag controversies, weather woes, and who knows--maybe your dog wet the carpet and chewed up your socks early this morning. So, with spring eventually arriving here in the Northern Hemisphere, maybe it's a good time to stop and smell the roses.
Blue-Butterfly Day

It is blue-butterfly day here in spring, and with these sky-flakes down in flurry on flurry, there is more unmixed color on the wing than flowers will show for days unless they hurry.

This excerpt from Seamus Heaney's "Digging" looks at ways of "planting and growing."

The cold smell of potato mould, the squelch and slap
Of soggy peat, the curt cuts of an edge
Through living roots awaken in my head.
But I've no spade to follow men like them.
Between my finger and my thumb
The squat pen rests.
Ill dig with it.

And, these ten photos of animals also remind us
to stop and smell the flowers.

Of course, the flowers might be ones that just bloomed in your garden. And it could be that the animals will "stop and eat the flowers" rather than simply have a zen moment. As Kurt Vonnegot said,
"So it goes."

Posted by Council for Agricultural Science and Technology at 10:00 AM No comments: Links to this post


Folks used to sit on the porch shootin’ the breeze. For many now, the porch is a cubicle and the breeze is digital. These are a few of the stories floating around our cyber porch today.

#1  Some are supposedly searching  for the “cow of the future,” a next-generation creature whose greenhouse gas emissions would be cut by anti-methane pills, burp scanners, and gas backpacks. Most of us just think the cows we know are going to continue chewing their cuds and reading old Far Side cartoons.

#2  A safety campaign called "Keep Kids Away from Tractors" will probably raise some controversy. Regardless of opinions, we hope all farmers and their kids stay safe as the growing season revs up this spring.

#3  Can you spell “silly”?  This “Alphabet Sandwich” has 26 different toppings, each one starting with a different letter of the alphabet.

#4  They stain tongues green, red, and blue—not to mention the sugar highs and self-induced brain freezes. But every year 7,290,000 gallons of Slurpee are consumed worldwide. This site examines the history of this icy treat.
dan gogerty (photo from dudefoods.com)
Posted by Council for Agricultural Science and Technology at 9:00 AM No comments: Links to this post