Can Barbie and Chewbacca Pitch Manure? 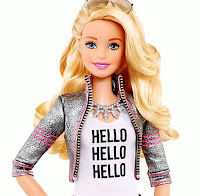 No offense, but my brothers and I never hoped for a Barbie doll as a Christmas present--even if it could carry on a conversation. We were farm kids growing up in the Davy Crockett era, and--as noted in the essay below--we were into plastic cows, miniature-scale tractors, and a wooden barn with a hinged hay door.

Toys that talk back are apparently big sellers this year, but this article points out that things can go astray--the Hello Barbie doll is susceptible to cyber hacks. A talking horse was as far as we went, and Mr. Ed was only on our black and white TV.

I imagine some farm kids still play with the traditional toys, but the lure of drones and robots must be big. It's a good thing they weren't around when we were young. Dad would have nixed any talk of drones: "You boys will just use them to scare the cattle and drop cow pies on each other." True. With our maturity level, we would have asked for drones licensed by the Three Stooges--ones that made irritating noises and caused mayhem. 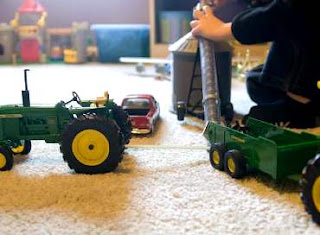 Robots would have been more attractive as we grew into "farm chore age." A manure bot could have cleaned the hog house for us on Saturday mornings, and the robo milkers they have now could have "squeezed not pulled" on our one milk cow--Bossy.

Star Wars robots are big this year, with the Sphero BB-8 Droid literally flying off the shelves. Can you imagine a Chewbacca bot that could have moved hay bales for us in the barn during cattle feeding time? The neighbor kids would have been impressed.

The techno stuff seems cool, and I'm sure I'll be buying futuristic toys for my grandkids as the years go by. But there's still something to say for the throw-back items. There are still plastic pigs that need feedin' and fuzzy carpets that need hayin'. When Dad spent hours building a classic barn for a Christmas gift, we kids were lucky in several ways. First of all, he is not a carpenter by nature. Baling wire and masking tape are his fix-it preferences, but he held a productive family farm together for decades, so maybe he was hiding his engineering talents.

On that Christmas morning years ago, we found a beautiful red barn with white trim—and a hinged haymow door that had us baling the carpet and hoisting small Lincoln logs we used for hay bales.

My brothers and I were fortunate in other ways. Johnson’s Hardware in our small town and the Ben Franklin store in the nearby county seat had basic farm toys—cabless tractors, a wagon or two, a few plastic Holstein cows. We could usually find packets of white plastic fence and during the holidays, the bigger store might have something exotic like a four-row planter.

But the offerings were basic, so we had to use our imaginations to fill in the gaps. Erector set pieces provided some props, and we could use small boxes, marbles, thread spools, or other items to make grain feeders, pig sheds, or water tanks. On special occasions, we used jelly beans or M&M’s for grain, but not surprisingly, the yield was mighty small by the time those loads made it to market.

Our animals looked like early versions of genetic engineering gone bad. They were mismatched sizes, several were bent from being stepped on, and at times I imagine a horse or camel was used to fill out the cattle herd in the pasture. The tractors weren’t much better. Enough of the tire rubber came off you’d think we were in the steel wheel era, and most of them had scrapes or mud left over from the summer when we’d set up a farm in the lane.

On winter days, we could work in 70 degree comfort as sun rays slanted in through the large picture window. Most of the cattle grazed comfortably in one spot unless my younger brother ran through the room and did a five-year-old’s version of cow-tipping. We probably had to move the operation to the “South Forty” at times when Mom and Dad needed the living room, but some type of farming occurred on the carpet until the spring thaw arrived.

Now, when I check the Internet or walk through kids’ stores, I see plenty of the basic “Old Macdonald’s Farms” for the little ones, and an impressive variety of machines ranging from classics to high-tech monsters. But with fewer family farms dotting the countryside, I wonder if the “let’s play farm” experiences are the same. Old-style windmills, slatted corn cribs, and small, square hay bales are probably found only in the relics section on eBay.

And now that we see so few pigs, chickens, or even cattle in the open air, I’d imagine the Christmas morning carpet is covered with less livestock--and many more action figures or discarded video game boxes.

I can understand. Even most farm kids aren’t going to ask for a confinement building or a liquid manure spreader for Christmas. Then again, you never know. I recall occasionally spreading shredded paper manure on the carpet after cleaning the pens in that classic red barn. We must have stepped in it too. Seems that once you’ve lived on a farm, it’s awfully hard to scrape the lifestyle and good memories off your boots.

by dan gogerty ( top pic from ubergizmo.com, middle pic from aquietlifeinaloudhouse.blogspot, and bottom pic from facebook.com)
Posted by Council for Agricultural Science and Technology at 12:45 PM No comments:


As Lauren Houska finishes her university agriculture and communications studies, she has a few suggestions for fellow students. 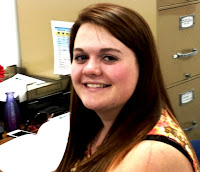 In the thick of Dead Week here at Iowa State University, last-minute projects are being finished, Netflix is being watched while notes sit idly open, and students are closing down the library instead of Welch Avenue bars at 2:00 a.m. As graduation day looms, I think of the freshmen who are just finishing up their first semester. If your first semester was anything like mine, you can definitely see room for improvement. I had the opportunity to be an undergraduate teaching assistant (TA) in animal science for the past three semesters, so I have spent a little time on the inside. I have heard professors talk about "those kids" and let me assure you, you do not want to be one of them. So, here are a few pro tips to help you out next semester.
Posted by Council for Agricultural Science and Technology at 10:05 AM No comments:

It's Alive! The CRISPR Debate

One of the biggest stories of our times might be the biotech angles opening up with gene editing and techniques like CRISPR. These new links are only a few of the many articles about this science that offers hope... and some trepidation.

**  New Yorker writer Michael Specter discusses emerging biotechnologies that will make it possible to remove disease and change the characteristics of life by rewriting the genetic code in cells.

**A new generation of crops known as gene-edited rather than genetically modified is coming to the market.

**Gene-editing techniques could help to improve stocks of farmed pigs by boosting supplies of sperm from prized sires. 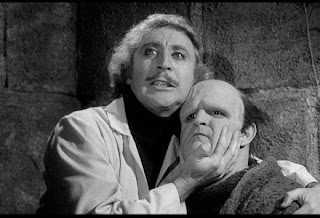 Unlike some alarmists, we won't describe recent gene editing advances by using the word commonly given to the "monster" concocted by Mary Shelley and revamped by Mel Brooks. But no matter what terms anyone uses, genetic topics are hot now--especially because of CRISPR, a revolutionary technology that can edit genetic mistakes.

The technique might help get rid of diseases like cystic fibrosis, muscular dystrophy, and cancer. This Harvard scientist thinks it could be used to "cure" aging. But some scientists are worried about the potential negatives--like "designer babies." Check out these articles for more background and commentary. 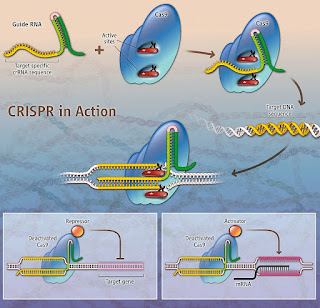 ** This comprehensive article examines the history, promise, and implications of the powerful new gene-editing technology.

** This short article looks at the basics and includes cautionary comments from one of the leading scientists involved in the development of the CRISPR technique.

** And this online magazine offers several related "CRISPR articles," including one discussing how much regulation should be involved.

Exciting times—and no doubt we will have controversy and debate. Plenty to be hopeful about, but maybe two quotes (taken out of context) from Young Frankenstein sum up the potential.

“Oh, sweet mystery of life, at last I’ve found you!”


by dan gogerty (top pic from siff.net; bottom one from doublexscience.org)
Posted by Council for Agricultural Science and Technology at 11:22 AM No comments: