Tilting at Windmills in the Fields of Dreams

October 2016
Wind energy, the fastest-growing source of electricity in the U.S., is transforming low-income rural areas in ways not seen since the federal government gave land to homesteaders 150 years ago.

March 2016
Iowa pulled in 31.3% of its electricity last year from wind generation. The state leads the nation in the percentage of electricity from wind--followed by South Dakota, Kansas, Oklahoma, and North Dakota.

The blog below examines the goods, the bads, and the beauty of these high-tech crops on the fertile flatlands.

They say just about anything will grow in the fertile soil of central Iowa, and to prove that point, huge wind generators have taken root among the soybeans and hay fields. My parents’ farm is the fulcrum point for two banks of these wind turbines. Starting at our neighbor’s farm to the south, 100 windmills stretch for nearly 15 miles in a hodge-podge order. About a mile northwest of our land, another 100 cut through the air in a random-abstract line that reaches the horizon. For a kid who grew up on a quiet farm in the Flatlands, these machines have an other-worldly quality to them.
I’m not complaining. They apparently generate home-grown energy, rent money for farmers, and some tax revenue for local schools. Many say the wind turbines bring in jobs, lessen the need for foreign oil, and produce energy from a renewable source. 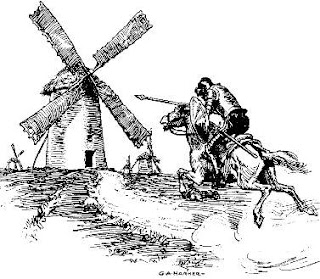 Other locals act more like Don Quixote when he first wants to attack the windmills in Spain. They question the energy efficiency claims and the amount of birds killed in the blades. Some mumble about nuisance factors, huge power lines, or even radio wave interference.
Thinking of energy independence, I hope the generators work in the long run, but I’ll leave the debate to others. I’m just glad they weren’t around back in our American Graffiti high school days. Misguided teens would be arranging parties under the more remote towers (“Hey, dig those flashing lights.”), or they might use the lonely maintenance roads for “extracurricular parking.”
And the temptation to climb might have been too much. For a few years in the late 60s, our small-town water tower became the Mt. Everest for crazies (“Why? Because it’s there.”). One school friend used the tower as his artistic message board, and another midnight climber managed to attach a Christmas tree to the light fixture at the very top. The wind turbines could have been sirens in the fields promising quixotic adventures.
Nowadays I’m more into the aesthetics of it all. Picture this: A warm, humid night in July, moon rising orange in the east, and a light breeze nudging gentle waves along the tops of tasseling cornfields. The old cottonwood tree near the barn creaks as it sways, but another sound surfaces, a low whirling white noise—an oscillating whoosh sound that is barely audible.
The towers stand as silhouettes along the horizon, and as the last rays of the setting sun fade away, windmill lights flicker in a slow, random sequence. With the stars adding a deep and endless canopy, the sweeping generator blades move in the shadows, and just as you’re about to slip into a zen trance, you begin to understand why Don Quixote unhitched his horse from reality and rode off into the land of illusions.

by dan gogerty (drawing from mainlesson.com--g.a.harper)
Posted by Council for Agricultural Science and Technology at 7:00 AM No comments: Links to this post

Driving Under the Influence on Country Roads

Update: If Barns Could Talk--an essay from Beef Daily.


Update:  The 9th U.S. Circuit Court of Appeals upheld the USDA decision to commercialize genetically engineered alfalfa.  It appears that Roundup Ready alfalfa is now available. Groups disagree about the effects this decision will have.


Every summer, a rural intoxication returns to our part of the Midwest.  When farmers cut the first crop of hay, I drive to my folks’ farm, roll down the windows, and let the aroma from a neighbor’s field seep in with the dust from the gravel road. If the hay is lush and fresh, and if a warm humid breeze carries the scent of alfalfa, orchard grass, and a few remnants of clover, you can feel the memories activate, and you can catch visions of an era gone by. 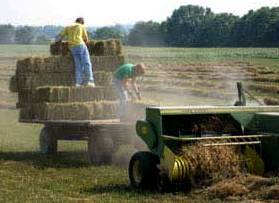 Nowadays, the few farmers who bale hay in our area use high tech equipment and generally produce huge round bales. Some decades ago, the ritual was more complicated. Everyone used machines that produced square, fifty-pound bales that we could stack and transport to the barn. We boys would grab the bales as they came out of the chute and then stack them on the rack in hopes that the load would hold together. If the bales tumbled off on the trip to the barn, you deserved all the ridicule you were sure to get at lunch time.
As we got older, we could hire on with baling crews, and if you joined up with old Clarence, you were in for a wild ride. He wore bib overalls and a tan safari hat while driving the tractor that pulled his customized baler equipped with a powerful “Wisconsin engine.”  As my cousin Tim says, “He could bale trees with that machine.” Clarence would put it in gear, seldom look back, and rarely slow down.  If the field was bumpy, we were like drunken sailors on the rack, and the only thing that held us down was grabbing the bales. They were extra heavy because Clarence used wire instead of twine, and we occasionally had to team up to hoist a bale to the top row of the stack.
Speed was fine with us, since Clarence paid by the bale—a whopping penny a bale—so if the machinery didn’t break down and rain didn’t set in, you could make twelve dollars or so in an afternoon.  That bought a lot of gas for a ’56 Chevy back in 1967.

Those images are gone as most hay fields now have seven-foot tall round bales casting shadows in the evening sun, but when I pulled into my parents’ farm and saw the large, red barn, a few more memories kicked in. The building won’t make a Barns-R-Us magazine cover, but it’s still sturdy and proud. Dad says it probably hasn’t changed much since it was built in the 1890s, but parts of the roof have metal rather than wooden shingles, and the classic cupola is gone from the top.
Since small, square bales are rare now, the barn is nearly empty inside, but you can still imagine the activity when the loads came in decades ago.  Someone on the rack secured eight bales with grappling hooks, a kid on a tractor (a horse in days before) would pull the rope, and a pulley system lifted the bales to the open barn door and then in. We bale stackers made sure we weren’t under the bales when they dropped, and we also tried to make some symmetry out of the piles.
The best things about barns came a few years before we were old enough to do the heavy chores. A full barn can be scary when you’re little, but my brothers, cousins, and I would play hide-and-seek or tag there. We’d make caves and tunnels in the bales and hope that the next time we crawled through, chickens hadn’t laid eggs or raccoons hadn’t “laid” something worse in the narrow passages. The barn was a place to hunt pigeons with BB guns, shoot hoops at a crooked basket when enough bales were used up, and play king-on-the-mountain when it was time to rough house.
I hear they’re using biotech alfalfa for hay in some parts of the country. I know folks argue the pros and cons, but I haven’t looked into it enough to know the particulars. I just hope that if the neighbors use GMO alfalfa, the same sweet smell will be there with the first cutting. Somewhere there’s a kid crawling through a haymow tunnel counting on it.  by dan gogerty (top right photo from livinginthecountry.com; left photo from locusthill.com)
Posted by Council for Agricultural Science and Technology at 7:27 AM No comments: Links to this post