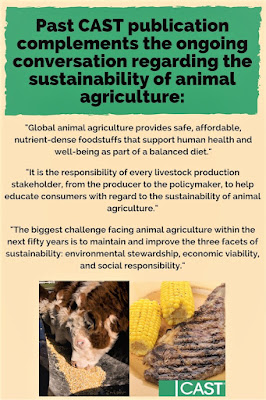 Sustainability is a term used frequently by multiple facets of agriculture, including beef production. The term is often hard to define but unarguably highly sought after by all industries. A perception exists that feed produced for animal consumption competes with human food supplies. This opinion can often be confusing for consumers--and at times it portrays livestock producers as inefficient, wasteful, and unsympathetic. In a 2013 Council for Agricultural Science and Technology (CAST) publication, Jude Capper addresses the various challenges the global livestock industry faces as population growth increases and the average American becomes further removed from production agriculture. Although this paper was written several years ago, mainstream media proves that the discussion has not ended. Here are a few articles recently addressing the subject:

Dan Murphy, a veteran food-industry journalist, acknowledges that global livestock production’s eco-footprint on the planet is significant, but he provides hard evidence on how population growth strongly correlates with such effects. Additionally, Dan shares his opinion on distraction tactics and the reality of resource consumption in production agriculture.

A Feedstuffs article written by Dr. Nevil Speer shares similar opinions with Dan Murphy. Throughout this piece you will read about his thoughts concerning the general consumer perception of the U.S. beef industry.

"Livestock: On our plates or eating at our table?" That question is addressed in this research paper that analyses global livestock feed rations and feed conversion ratios—it gives specific insights on the diversity in production systems and feed materials.

A recent quote from Jude Capper states, “Livestock sustainability continues to be a significant issue for producers, policy-makers, and consumers worldwide. Claims that livestock compete with people for food are still being made on a daily basis. Millions of tons of by-products from the human food and fiber industries can be fed to livestock in order to produce safe, affordable, lower-environmental impact animal proteins, and ruminant animals can produce high-quality milk and meat from poor-quality grazing land where we cannot grow other crops. We are all faced with the challenge of communicating the benefits of livestock production to food stakeholders to maintain a resilient global industry, both now and in future.”

By: Kylie Peterson
Posted by Council for Agricultural Science and Technology at 11:50 AM No comments: Links to this post

Dreaming Big about Cattle and Communications

Kylie Peterson grew up on a cattle farm, and even though her years at Iowa State University pulled her away from home, she hopes to keep at least one cowgirl boot in the pastures and feedlots of that reclaimed coal mining land near Albia, Iowa. “I started showing cattle in 4th grade, so it’s part of my life. I love working with livestock and using my experiences to converse with others about agriculture.”

Ten-year-olds don’t always take to farm life, but Kylie was a natural. The first bottle calf she showed cost $100—and lots of time, effort, and patience. Her family’s pasture and row crop acres support a thriving purebred Simmental cattle operation, and within a few years, Kylie was actively involved with the Iowa and American Junior Simmental Associations. While working with cattle and judging livestock, she also developed valuable life skills such as public speaking, responsibility, time management, and work ethic.

Of course, every happy story has to have a “Buck” in it, and for Kylie, that came in the package of a 1,200-pound steer. As she explains, “Buck had me ‘buffaloed’ in a sense. I hated working with him as he would either drag me around the feed lot or throw me up against barns.” Kylie loves cattle, but she reluctantly admits, “I wasn’t sad to see Buck get loaded up for that last trip to the processing plant.”

At ISU, Kylie was involved with Sigma Alpha (pro-ag sorority), Block and Bridle Club, and a number of other campus organizations. She used her love of photography while making advertisements and catalogs for the 2016 Tradition of Excellence Beef Sales Team, and she added to her writing and social media skills at the Egg Industry Center—designing brochures; composing content; and managing the organization’s Twitter account, Facebook presence, and website.

During her years of study, she continued to touch base with the home farm—she hasn’t lost her abilities to help with breeding, calving, tagging, vaccinations, and other chores. Designing an impressive web page is challenging, but helping deliver a calf late at night in frigid weather? That accomplishment produces immediate feedback when the newborn first stands on its trembling, awkward legs.

After graduating with a degree in agriculture, Kylie accepted a position at the Council for Agricultural Science and Technology. As she said, “My passion is to serve as an advocate for the agricultural industry through communications. It is a beautiful thing when a career and a passion come together, and I look forward to bringing that enthusiasm for the industry to CAST.”

It's clear that the family farm has been the foundation for Kylie’s aspirations. As she points out, “My parents always encouraged my two sisters and me to surround ourselves with people who believe in our dreams. With determination and lots of hard work, you can accomplish anything.” Luckily for the world of agriculture, Kylie’s dreams include communicating about science, food production, and the varied people who keep us fed. The CAST community welcomes her.

by dan gogerty
Posted by Council for Agricultural Science and Technology at 12:05 PM No comments: Links to this post


I recently found out what was happening during those years when I grew up on a farm—I was developing “scar tissue for the soul.” 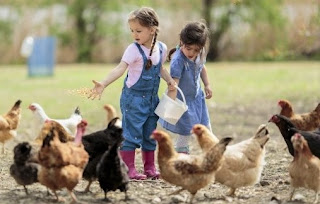 In his new book (The Vanishing American Adult) about the rewards that come from hard work and farm values, Senator Ben Sasse of Nebraska says that youngsters should “embrace work pain” and learn how to persevere. Ah yes—scooping corn in dusty grain bins and milking a cantankerous cow on frosty November mornings. I don’t recall having an urge to embrace anything, but I see Sasse’s point: It was good to grow up on a farm—work included.

The Senator thinks we need to help our youngsters develop resiliency. He and his wife have shipped their three children off to farms for a spell so they can rise early and “get dirt under their fingernails.” As Mom still points out, “When you kids tumbled back into the house for lunch, you had a coat of dust, cockleburs, and dog fur on you.” And even though Dad wasn’t the boot camp type, he made sure we didn’t sleep in. He always called out the same command: “Time to get up, boys.” It sounds benign, but it somehow had a Darth Vader undertow to it.

Sasse thinks young people are too sheltered—difficult tasks build character. As he wrote, “We applaud and celebrate stitches at our house.” Ouch. Some painful memories. Any farm kid can tell you that wrestling with animals, machinery, and three-foot-tall bull thistles can leave a mark. But the most danger came when we three brothers joined our cousins down the road for a team effort. Weeding soybean fields? Somebody was bound to toss a dirt clod at you just to keep you focused. Picking up rocks in the field west of the house? We should have 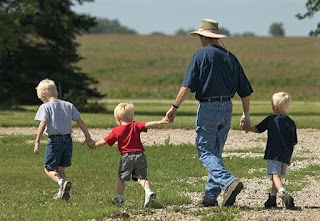 worn helmets. Stacking hay in the barn? Who wouldn’t want to play king-on-the-hill when a 50-pound bale can be used as a weapon?

Actually, I do have a set of “Sasse stitches” from yesteryear. On a cold winter day at the age of three, I fell out of a stationary pickup truck in the feedlot. Face first onto a frozen cow pie—and three stitches under my chin. Manure happens.

Sasse worries that our society has created a Neverland atmosphere where kids can linger too long in the Peter Pan mode. We were more like the Lost Boys in our day—working, playing, and floating through adolescence. The digital age has changed things, and fewer kids grow up on farms--but independence, perseverance, and hard work are certainly worthy goals. The setting could be a pasture in Iowa or a city park in Baltimore—a bit of scar tissue might be fine, but let’s hope that children have a chance to experience some joy for their souls, too, as they make their way into adulthood.

by dan gogerty (top pic from midwestallergy.com and bottom from iowafarmbureau.com)
Posted by Council for Agricultural Science and Technology at 7:30 AM No comments: Links to this post