Feeling the Buzz at the Farm Progress Show


Doc Callahan occasionally helps with this blog, and when he stopped by this morning, he mentioned he had been to the Farm Progress Show. We made the mistake of asking him what's buzzing at the huge gathering.

A couple of things bogged me down there. The streets in the exhibition may be paved, but the parking area is like a scene from Duck Dynasty goes swamp roving. I lost a flip-flop in the mud and switched to my 5-buckle boots. The other mucky topic is grain prices. They seem to be on quicksand at the moment, and that's a concern for many in the agricultural economy.

But let's look on the bright side. The Show is a wonderful promotion for agriculture, with new tech and familiar faces everywhere. Five webcams, an interactive map, and an informational app keep you on your toes. It's a great place to learn and exchange ideas. I’ve always figured by the time I discover a hip happening, it’s already gathered dust—like the word “hip” itself.

But I did notice some common threads. Here are a few buzzwords:

As you can tell, I’m constantly behind the curve, so take the above for what it’s worth. As one company’s slogan said, “Put your farm in the cloud.” Hmmm. Some of us have been living with our head in the clouds for years.  Maybe I’m a step ahead with that trend.  Doc

Editor's Note: Adding to the mud problems, day three of the show was cancelled due to rain. Regarding some of the key topics mentioned by Doc, CAST has several highly respected research papers that address the above "buzz" issues. They are science-based and peer-reviewed publications, and you may access them free at the sites listed below:

Animal Feed vs. Human Food: Challenges and Opportunities in Sustaining Animal Agriculture Toward 2050
Posted by Council for Agricultural Science and Technology at 8:50 AM No comments: Links to this post

The Most Important Place on the Farm


Many farm families think of the kitchen as the house “great room”—the entrance, the exit, and the nerve center. Mom says an official kitchen also needs a window that opens onto the farm operation—a type of captain’s bridge. “Our window faces east,” she says. “The sun rises over the pasture and full moons sit large over the neighbor’s field on summer nights. I watch tractors heading to the field, cars on the lane, and cattle trying to jump the fence. Occasionally I’ll see a crop duster in the distance or a blue heron rise from the creek.” 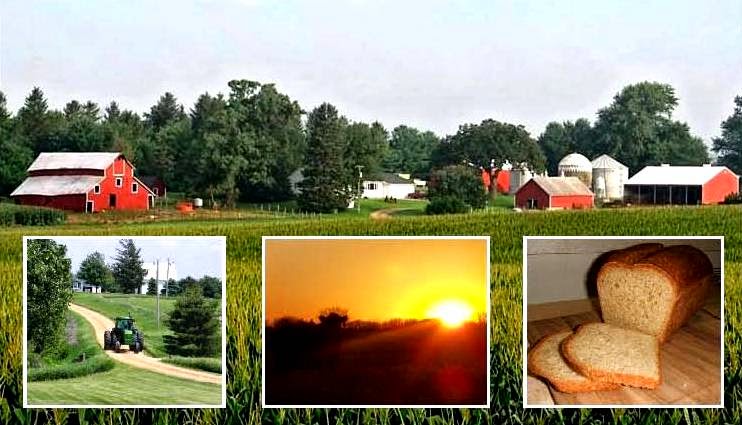 Mom likes the view, but she isn’t so poetic about the inside décor. “The linoleum floor looks like we have wild weekend barbecues inside, and the stove is old enough to land a spot on Antiques Roadshow.” She and Dad have held court in the room since they were married in 1949, and Mom knows fancy appliances haven’t been the key. “We added that sliding glass door at the back in the 1980s and knocked out a wall. Since then, the light and open space have made it a real gathering spot.”

Of course the kitchen means food and regular meals, but it can be a magnet for other reasons—party room, quick stop, kids’ playroom, and TV den. The oak table gets used for card games, board games, puzzles, coffee breaks, goofy chit-chat, serious conversation, and the weekly “tonica night”—the hours after 5:00 p.m. on Fridays when anyone and her dog can stop in. Friends, relatives, in-laws, and outlaws sometimes add to the music and good cheer. And the dog reference is no figure of speech—my sister Mary usually brings Bertha, the only dog bigger than Clifford. Bertha slobbers a bit, sits quietly, and often appears ready to pull up a chair at the table during card games. 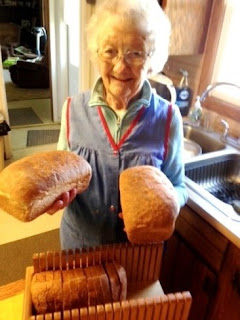 Even during Dad’s busiest farming years, he joined the family at the table for meals—somebody had to help Mom keep us kids from flicking peas and kicking each other under the table. Brother Kevin runs the operation now, but Dad “still likes to play with tractors.” He has, however, become a kitchen jockey too. He knows how to gather the mixer, flour, and rolling pin on baking days. “Your mother has me well trained. We can whip up loaves of bread or a batch of cookies about as fast as those smooth-talkin’ foodies on cable TV.” With a growing mob of great-grandkids making frequent visits, the cookies don’t last long.

Dad has grown to appreciate the history of the kitchen also. He remembers hot summer days when the women had canning sessions, or they might prepare a “threshers’ meal” for twenty men working in the fields. “Grandpa Bill designed the original room in the 1890s,” he said. “I imagine it had a wood stove, water pump, and one door to the outside—an important escape hatch since the only toilet was an outhouse in the backyard.”

Grandpa Bill and his ancestors join a gallery of family members on the wall. Brother Tom has fashioned wooden plaques to display family photos, so if our table conversation starts to lag, we can pull out some folklore about “goodtime” Great Uncle Berry or laugh about the way we looked at family gatherings decades ago. “Hey Annie. If you’d put on a flowery hat, you’d be the spittin’ image of Grandma Callahan.”

“Who are you, the Fashion Police?”

A farm kitchen is often the social center, but it can also be a sanctuary. Dad still lives in a world of print so newspapers, magazines, and books sit in various piles around the room. A partially completed jigsaw puzzle is scattered on a card table near the back sliding door. Mom maneuvers pieces and watches birds at the feeders out back as they come with the seasons, as do the snow drifts on the deck or the spring dust blowing in off the fields.

She has seen the world turn for more than 65 years in that kitchen, and with help from Dad, she’s made it a small world of its own. “I watched out the front window as you kids marched up the lane to the school bus,” she says. “I’d see you bouncing back down in the afternoon and wonder how the day went so fast. Now I look out the window and see your grandkids playing in the yard and wonder how life went so fast.”


I grew up thinking a real farm had certain built-in qualities—an oak tree to dispense shade, acorns, and wisdom; a barn with a haymow, square bales, and kids playing in it; and a creek that meanders through pastures, ready for fishing, skating, or swimming. 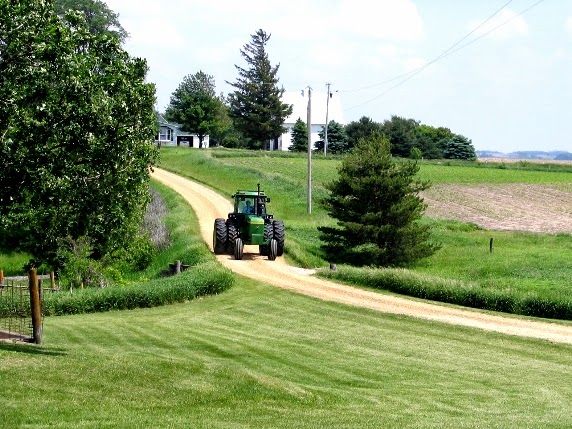 A creek also means a bridge—in our case a small wooden structure with no side rails and a gravel lane that crosses it. It’s not much really, but when we were kids, it was an unwritten rule that we had to stop and toss rocks whenever we came near it. On hot summer days, we’d sit there, swinging our legs, aiming small stones at driftwood or lugging larger rocks over to see who could make the biggest splash.


The bridge symbolized the many treasures the creek held for us kids. We could race quickly made stick boats or throw cold mud at each other on muggy afternoons. If we followed the creek a short distance to the next pasture, we reached where it fed into a bigger stream—one that offered fishing holes and dam-building venues. We might float on inflated tire tubes when the water was high, or at twilight we might just watch the dragonflies skip across the water and the frogs leap from the bank into the aquatic grass.
I fell off the bridge once, probably at the age of eight or so. It’s only a seven- or eight-foot drop, and if you land in water or mud, the fall isn’t much. I was more frightened several years before when the bridge was washed out, and we had to walk the plank for a few weeks. Dad set up a wide, sturdy board 25 feet up stream, with the house on one side, the car and the outside world on the other. We three boys were ages 4, 2, and 1. My folks probably grew tired of carrying us across. I had enough morbid imagination to be certain we would fall in—no doubt swept downstream to a watery grave.
Dad reckons our ancestors had to ford the stream when they settled there in 1856. “It had less water then,” he says, “but it would have been easier to locate the buildings on the other side of the stream.” Dad has a love/hate relationship with the bridge. He has watched flash floods take it out, and he remembers when we used to herd livestock down the lane. “Spread a bit of straw, rattle a feed bucket, and cattle usually crossed. Hogs were different. As soon as their front hooves touched the bridge planks, they’d hit reverse, and you had a 250-pound ham backin’ into you.”
Mom could see the bridge from the house, and she’s amazed none of us ever drove over the side. “You could survive falling off alone into the mud, but going off while on that old John Deere 4020—well, the way you kids drove scared me to death.”

Inconveniences and dangers aside, we all know the bridge is a crucial piece in the farm’s jigsaw puzzle. When we come down the lane and cross the bridge, we’re officially home. It’s a wrinkle in time that crosses space and generations. A few weeks ago, my wife, our daughter, and our granddaughter walked to the bridge in the summer twilight. The two-year-old tried to toss rocks, my daughter tried to keep her from falling in, and my wife enjoyed the déjà vu moment.
When I drive off after visiting the home place, I usually make a stop on the bridge. I’m not sure what I expect to see—a muskrat swimming to its den, a blue heron with a minnow in its beak, a group of tow-headed kids and a shaggy dog running in the tall grass along the bank downstream. Maybe a farm bridge is just a good place to pause for a moment—a place to toss a few rocks every so often.
by dan gogerty
Posted by Council for Agricultural Science and Technology at 8:59 AM No comments: Links to this post