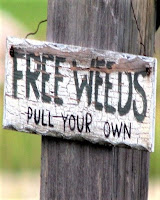 A home owner in our part of town always had the most weed-infested lawn, but last summer he cut it all close to the ground and posted a "Prairie in Progress" sign. I love prairies, but a year later his lawn still looks like a weed festival. Maybe it just takes time. As Mark Parker indicates in his list of Top 10 Excuses for Weedy Fields, "My field is an experiment to see if weed shade reduces crop heat stress." Parker also includes a line stating "They're not weeds, they're pollinator plants."

In some instances, the difference between a weed and a beneficial plant is in the eye of the beholder. Most lawn owners treat dandelions like whack-a-moles, but a few folks use them for salad greens or an ingredient for wine making.

In the long run, weeds live up to their destructive nature, and agriculturalists know that the world would go hungry if producers had no means to protect their crops. CAST Issue Paper #58 provides a science-based look at the current plant protection revolution that is driven by the biological realities of pesticide resistance, various market forces, and real or perceived side effects of pesticides.

This video series looks at innovations that are changing the face of the crop protection industry--fighting crop pests while considering human health and the environment.

Controversy Growing in the Fields

This corporate head says the world is likely to face food shortages if pesticides and genetically modified crops are shunned. Mark Lynas--activist turned biotech proponent--says science shows that GMO crops are perfectly safe. Not all agree. Consumers appear to be influenced by food labels that indicate biotech origin, and in California, the first of many court cases is underway as plaintiffs claim glyphosate caused their cancer. 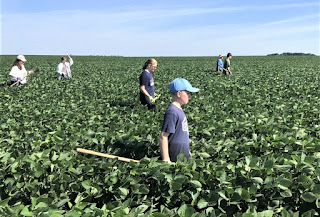 A related debate is occurring as Hawaii became the first state to ban the pesticide chlorpyrifos. During the previous administration, the EPA proposed banning the chemical, but the current EPA says it will not put an outright ban on chlorpyrifos "without first attempting to come to a clearer scientific resolution on the matter."

Whatever the future of crop protection brings, most would not want to return to the methods we used during the "field walking days." This blog from several years ago looks at the glyphosate situation, but it also recounts what it was like to hand weed soybean fields on hot summer days. "We'd often start early to beat the heat; dew-drenched, with mud sticking to our sneakers, we'd trudge along, pulling most weeds, chopping some, and basically wrestling with the ones that seemed more like Seymour from Little Shop of Horrors." We kids could have used Matt Parker's list of excuses, but Dad wouldn't have been much interested if we had claimed that organic matter contributes to the soil, and wildlife needs its natural habitat.

by dan gogerty (top pic from pinterest.com, middle pic from cornandsoybeandigest.com, and bottom pic from ottofarms.com)


Posted by Council for Agricultural Science and Technology at 8:22 AM No comments: Links to this post

The Latest Buzz on Pollinator Research

As summer enters into full bloom, it's time to celebrate all the birds, bees, and bugs that make fruits and flowers possible. Find out the latest on pollinator research below as we approach the final days of National Pollinator Week. 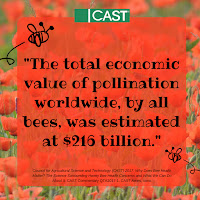 A Call for Better Balance:
A review of past studies by a team of entomologists shows gaps in our knowledge on floral resource competition between management of honey bees and wild bees. These findings suggest that such interactions call for further research to better inform decisions on honey bee management and pollinator protection.

Farmers Can "Bee" a Friend to Pollinators:
Pollinators are critical to our food supply as three-fourths of the world's flowering plants depend on them to reproduce. Through a variety of USDA conservation programs, farmers and ranchers can manage top-notch pollinator habitats while also improving their operations.

Bee Brains and Aggressive Behavior:
Honey bees are incredibly territorial, fighting to the death to defend their hive with painful stings. Biochemists are studying the social behavior in bees to help understand the basis of killer bee aggression. 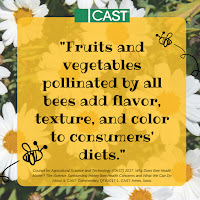 Bees Join The Zero Club:
Humans' invention of zero was crucial for modern mathematics and science, but we're not the only species to consider nothing a number. Honey bees are known to have some numerical skills, such as the capacity to count to four, but researchers took it a step further to see just how sophisticated bee brains are.

Caring for Bees Keeps Your Coffee Coming:
It is common knowledge that pollinators play an immense role in the world's food supply, but it has been often underestimated just how impactful they are on coffee production. New research helps shed light on their contribution.

Kansas Kids Initiate Effort to Protect Pollinators:
Nearly two dozen Kansas kids are stepping up to increase the odds of survival for the monarch butterfly--an iconic insect that is fluttering toward becoming an endangered species. 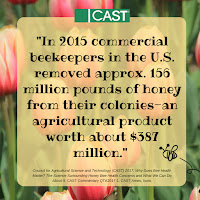 Islands Have Returned to Lake LaVerne
Iowa State University isn't new to the floating island project, but there's a twist to this year's graduate program--students will be studying pollinator plant performance in addition to water quality and nutrient uptake.

Unusually Hot Spring Threw Plant Pollinators Out of Sync:
Unusually high spring temperatures in Europe have thrown the ecosystem out of whack. The warm temperatures accelerated the hatch of many butterflies and other pollinating species, but the flowers they depend on for nectar are not responding in sync.

The Monarch's Stupendous Migration:
This unique comic illustration describes how scientists have worked to understand the monarch migrations and some of what they don't yet understand.

Why Does Bee Health Matter?
This CAST publication provides a summary of the scientific issues, current research, and recommendations related to bee health. The graphics in this blog highlight other important information covered in this CAST Commentary.

By: Kylie Peterson
Posted by Council for Agricultural Science and Technology at 12:36 PM No comments: Links to this post 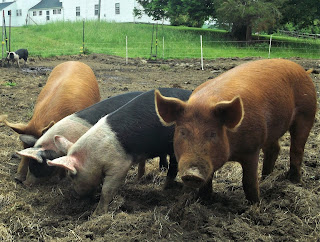 We grew up on a farm during the era of the first Batman and Superman TV versions, but an early superhero for us was the rural veterinarian. As an eight-year-old, I watched Doc Walker perform his own type of CSI in our north grove where the pigs roamed. A 250-pound barrow had mysteriously collapsed and died. Doc pulled out his implements, and we kids stared as he cut and probed in the fading light. He finally determined that the hog had eaten from a deadly nightshade plant—a rare occurrence and cryptic enough to get us buzzing about poisons.

Later that year, I saw Doc do a cesarean on a neighbor’s sow. Blood, pulsating innards, slime-covered newborn pigs—I had plenty of details to use during the classroom show-and-tell session the next day at school.

For rural veterinarians, these performances were all part of the routine, and as Dad reminded me, country vets back then held the farming community together. “It was more than the sensational episodes that made the vet important. They helped us during the hog cholera epidemics of the past, and when various vaccinations came on the market, they kept our herds protected.”

With the changes in technology and farming practices, the particular skills needed for a large animal veterinarian have widened, but their main mission is similar. They help the producers raise safe, wholesome animals, and they play a key role in protecting the health of the general public. As this article points out, they are the first line of defense against diseases that can spread from animals to humans. 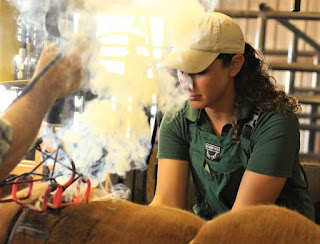 Many rural areas in the United States face a severe shortage of veterinarians--especially ones who specialize in livestock. Federal officials are taking some steps to close this gap. The USDA reports that only 5 to 8% of graduating veterinarians join private practices with an emphasis on food animals. Some hope that a bipartisan Veterinary Medicine Loan Repayment Program Enhancement Act could help with the problem.

During the past few years, young people have been showing more interest in agriculture-related professions, and officials hope this trend affects the veterinary field also. Rural communities, livestock producers, and anyone who eats should hope young people can combine intelligence, a love of animals, and enough tuition money to make it through veterinary school and on to large animal practice.

Maybe they can be lured in by the glamor involved with getting a sick bull to take its medicine or sticking a gloved hand “where the sun don’t shine” to help during a difficult birth. As Dad recalls, “There was old Doc, working hard in the muck, vaccinating young hogs for erysipelas, and what was his reward—a pig he was holding sent a strong stream of urine straight into the top of his rain boot.” Maybe we should add “sense of humor” to that list of characteristics for prospective veterinarians.

by dan gogerty (top pic from newenglandgrassfed.com and bottom pic from publicbroadcasting.net)

Posted by Council for Agricultural Science and Technology at 1:29 PM No comments: Links to this post