Gene editing advances and precision farming techniques are producing a bouquet of plant breeding innovations that give food producers options for keeping up with global food security needs. At times confusing and controversial, farming practices are changing rapidly, and these links will help you keep up with some of the most notable happenings.

#1 Plant Breeding and Genetics--A paper in the series on The Need for Agricultural Innovation to Sustainably Feed the World by 2050. An excerpt from the press release: 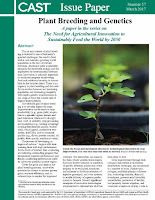 Many think it is time for another green revolution, one that utilizes technological innovation in smart, sustainable ways. Humans depend on plants for food, feed, fiber, and fuel--as well as less tangible aspects of life such as aesthetics and environmental stability. This paper is the first in a series that connects science and technology to agriculture, and it focuses on the critical importance of innovation in plant breeding to meet the challenge of providing food and nutritional security to humankind. The authors of this issue paper use science-based information and peer-review methods to establish the importance of plant breeding innovation, and they cover several key areas:

#2 Variety Development Includes Genetic Approaches by Kevin Folta, professor and chairman of the Horticultural Sciences Department at the University of Florida. An excerpt from the article:

Dr. Folta mentions the non-browning Arctic Apple and points to an innovation pipeline in horticultural crops--including beta carotene-producing bananas, low acrylamide, non-browning potatoes, and blight resistance. He also says, “The future of horticultural crop genetics is breeding. There will continue to be new breakthroughs in development and sequencing. What changes in DNA are always associated with a certain trait? That’s genetic selection. There’s a revolution in genomic selection. It involves the surgical dissection of a genome. It’s the same as traditional breeding, but directing where changes take place.”
#3 Plant When the Oak Leaves Are the Size of Squirrels’ Ears. This blog looks back at the technology of planting during days gone by. An excerpt from the blog: 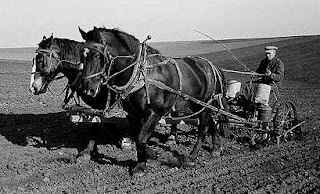 Dad has farmed through the Ag Tech Renaissance, a time when planters have moved from two-row to sixteen and twenty-four row. “We’ve had it relatively easy,” he said. “Your grandpa planted with horses. Half-mile rows on warm days got pretty tough. He had one horse that would revolt at the end of every round, lie down for a while, and finally get back up and start plodding along again.”
Back then, they would stretch planter wire the length of the field, follow it along and “button” in a seed every forty inches, and at the end, they’d move the wires and start again. It could be dangerous as well as tedious. Apparently lighting strikes on the wires could kill a horse, mule, or man.

by dan gogerty (bottom pic from vachon,libraryofcongress)
Posted by Council for Agricultural Science and Technology at 10:11 AM