Christmas on the Farm--Red Barn, Mismatched Livestock, and Memories Stuck to Our Boots 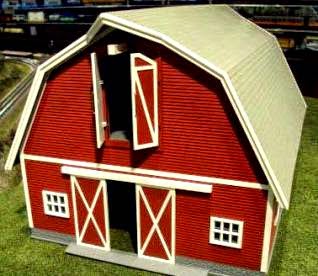 When Dad spent hours building a classic barn for a Christmas gift, we kids were lucky in several ways. First of all, he is not a carpenter by nature. Baling wire and masking tape are his fix-it preferences, but he held a productive family farm together for decades, so maybe he was hiding his engineering talents. On that Christmas morning years ago, we found a beautiful red barn with white trim—and a hinged haymow door that had us baling the carpet and hoisting small Lincoln logs we used for hay bales.

My brothers and I were fortunate in other ways. Johnson’s Hardware in our small town and the Ben Franklin store in the nearby county seat had basic farm toys—cabless tractors, a wagon or two, a few plastic Holstein cows. We could usually find packets of white plastic fence and during the holidays, the bigger store might have something exotic like a four-row planter.

But the offerings were basic, so we had to use our imaginations to fill in the gaps. Erector set pieces provided some props, and we could use small boxes, marbles, thread spools, or other items to make grain feeders, pig sheds, or water tanks. On special occasions, we used jelly beans or M&M’s for grain, but not surprisingly, the yield was mighty small by the time those loads made it to market.

Our animals looked like early versions of genetic engineering gone bad. They were mismatched sizes, several were bent from being stepped on, and at times I imagine a horse or camel was used to fill out the cattle herd in the pasture. The tractors weren’t much better. Enough of the tire rubber came off you’d think we were in the steel wheel era, and most of them had scrapes or mud left over from the summer when we’d set up a farm in the lane. 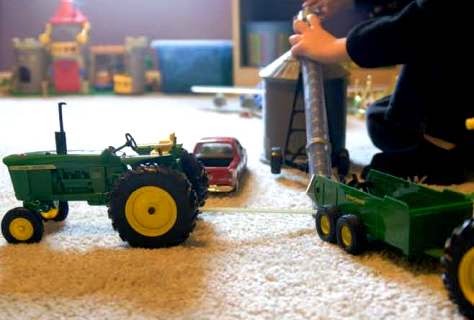 On winter days, we could work in 70 degree comfort as sun rays slanted in through the large picture window. Most of the cattle grazed comfortably in one spot unless my younger brother ran through the room and did a five-year-old’s version of cow-tipping. We probably had to move the operation to the “South Forty” at times when Mom and Dad needed the living room, but some type of farming occurred on the carpet until the spring thaw arrived.

Now, when I check the Internet or walk through kids’ stores, I see plenty of the basic “Old Macdonald’s Farms” for the little ones, and an impressive variety of machines ranging from classics to high-tech monsters. But with fewer family farms dotting the countryside, I wonder if the “let’s play farm” experiences are the same. Old-style windmills, slatted corn cribs, and small, square hay bales are probably found only in the relics section on eBay. And now that we see so few pigs, chickens, or even cattle in the open air, I’d imagine the Christmas morning carpet is covered with less livestock--and many more action figures or discarded video game boxes.

I can understand. Even most farm kids aren’t going to ask for a confinement building or a liquid manure spreader for Christmas. Then again, you never know. I recall occasionally spreading shredded paper manure on the carpet after cleaning the pens in that classic red barn. We must have stepped in it too. Seems that once you’ve lived on a farm, it’s awfully hard to scrape the lifestyle and good memories off your boots.
by dan gogerty (barn photo from facebook.com; carpet photo from aquietlifeinaloudhouse.blogspot)
Posted by Council for Agricultural Science and Technology at 8:16 AM No comments: Links to this post


Light Up a Cigar? Cuba, Politics, and Agriculture:  Not all agree with President Obama's statements regarding a thaw with Cuba, but it has been near unanimous approval from major farm and commodity organizations. Several issued positive statements about the outlook for increased agricultural exports to the island nation.

Checkoff the Checkoff:  Agriculture Secretary Vilsack said the USDA will not pursue efforts to create another checkoff under the 1996 commodity promotion law.

Cattle Ranching Is a Habit at this Abbey:  Nuns at an abbey in Colorado raise cattle, water buffalo, and llamas. According to the nuns, llamas chase away mountain lions to protect the cattle.

Hands Down--the Best Pet Video Lately:  This link provides the “pets at the table with human hands “ clip and a fascinating “making of” segment.

Speaking of dogs, these two blogs look at farm dogs and human foibles.

During my youth, we had several dogs, and some people might take issue with our nurturing techniques, but we never mistreated them. They were generally mutts, some strays, some passed on from neighbors, but the basic routine was this:  When we were kids, a dog would be in the front yard every morning when we emerged from the house; it would slobber, yip, and tag along with us all day; it would be a member of our football team and a part of any snowball fight although it wasn’t good at throwing things; and if I could talk my younger brothers into it, the dog would take alternate licks from their tootsie roll pops as we sat on the front step in the summer heat.

What is it about dogs? I grew up running pastures and playing in snow banks with several good farm dogs, but jobs and travel have kept me from owning dogs since, so I marvel at what people will do for a dog that, for all intents and purposes, has become a member of the family.

Posted by Council for Agricultural Science and Technology at 8:03 AM No comments: Links to this post