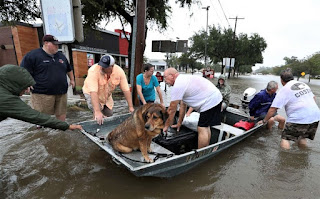 (2) An update of how agriculture has been affected by the storm--how it upended life for farmers and ranchers across dozens of counties.

(3) There have been a lot of wonderful stories going around on social media of people banding together to help save one another’s livestock--and this article gives updates about crop damage, infrastructure concerns, and livestock problems. And this second article covers the damage to the rice crop.

(4) This ag group provides ideas about how to help. 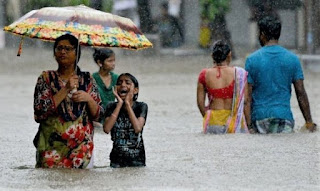 Crops have also been ravaged, and some cotton gins may not operate for the rest of the season.

As the Texas A&M extension group says, feed, forage quality, water, and hay use will all need attention in aftermath of hurricane.

(1) Photos of those affected, humans and animals

(2) Many ranchers are still trapped by the high waters and have few ways to check on livestock or assess damage.

(3) Texas farmers are surveying damage caused by Hurricane Harvey after it slammed into the coast, knocking over grain storage tanks and damaging cotton crops. An expected bumper crop of cotton had been underway.

(4) (audio) In some cases, ranchers are riding horses through stomach-deep water to herd cattle to higher ground.


(5) Historic flooding is also occurring in Asia. Heavy monsoon rains have slammed Nepal, Bangladesh, and India for weeks, leading to what international rescue and aid organizations say is the worst flooding in decades.
Nearly 1,200 people have died so far in the disaster. 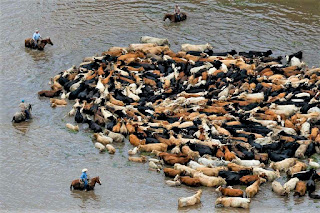 With Houston, southeast Texas, and parts of Louisiana currently in crisis mode, the nation is focused on saving those caught in the disaster. Authorities across Texas continue to rescue people stranded by historic flooding left in the wake of Hurricane Harvey, even as forecasters warn of looming rain, rising rivers, and floodwaters that could swallow still more streets and neighborhoods. Forecasters predict this storm will produce more rain than has ever been seen in the United States.

(1) Texas farmers are assessing damage caused by Hurricane Harvey after it slammed into the coast, knocking over grain storage tanks and damaging cotton crops.

(2) Some cattle owners closest to the coast have been working to move animals to higher ground, as livestock is under severe threat.

(3) This blogger explains how ranchers and cotton growers are trying to cope with the hurricane’s effects.

Many are helping with the disaster, and others want to join the efforts. For many in the nation, that means donations--authorities advise that donors check websites and agencies carefully and donate to reputable groups that can best help those affected.

top photo from abcnews.com, middle one from bbci.co.uk, and bottom one from chron.com
Posted by Council for Agricultural Science and Technology at 10:01 AM No comments: Links to this post

Members of CAST for Life

Gary Lortscher and his wife Betty of Bern, Kansas, purchased the family's country elevator in 1975--Lortscher Agri Service, Inc., founded in 1948 by his parents Dave and Marjorie Lortscher. In 2012, Lorscher Animal Nutrition Inc. was created to help evolve as an even stronger animal nutrition provider.

"On that day in 1975, we became quite involved in agriculture," explains Gary. "An analysis of the agricultural industry in our county did not bode well for a small country elevator at the time. Nonetheless, we plundered ahead with minimal revenues." Even though times were tough and profits were minimal, Gary and Betty chose to support, as a company, two entities--one was the Council for Agricultural Science and Technology (CAST).

Lifetime members of CAST, Gary and Betty saw their involvement with CAST as an opportunity that they could not miss out on. "We saw CAST as a respected entity in aiding our Congress in their drafting regulatory requirements and in being a reliable source of information for customers. Now, these many years later, we still see CAST accomplishing these functions. Congratulations to CAST!" 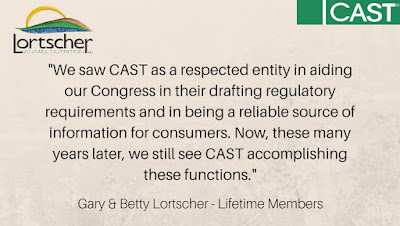 Since becoming proud owners and operators of Lortscher Animal Nutrition Inc. some 42 years ago, they diversified into custom pet food manufacturing, which allowed them to offer agricultural inputs and services to their agricultural customers while beginning to play a role in the manufacturing of pet foods.

Betty and Gary transitioned out as owners in 2010. "We stand in awe of what new owners--our son and his spouse, our daughter and her spouse, and our manager--are accomplishing!" Gary and Betty admit that they are loyal readers of CAST Friday Notes and often chuckle when watching some of the videos.

If you are interested in reaping the benefits of CAST, as does Gary and Betty, visit our website for more information or call us at 515-292-2125.

Posted by Council for Agricultural Science and Technology at 2:19 PM No comments: Links to this post

If video killed the radio star, then smartphones sent many farm practices and traditions to the graveyard. They were mercy killings in most cases—who wants CDs or cassettes in their truck cabs if digital music is flowing from the clouds? But as the tech highway turns into an expressway on many farms and ranches, we might end up with a few bits of analog roadkill that we’ll miss.


Nowadays, if you can find a transistor radio in a store, it’s probably covered with dust on a shelf next to a stack of VHS tapes. For many farmers, a portable radio provided weather forecasts, grain market reports, and sports scores. At our noon family meal, Dad would turn down the farm show just long enough for the prayer. After that, we kids could chat and be goofy as long as he could hear the livestock prices and USDA grain projections. Smartphones provide weather radar, podcasts, and up-to-the-minute market info. Transistor radios are an endangered species.

Cell phones initiated a slow euthanasia for landline phones years ago when the cord was severed. Some farmers still have a unit on the wall, but gone are the days of rotary dial or party-line systems. It used to be fun listening in on others who shared the party line--a type of neighborly hacking--but now farmers can have their smartphones anywhere. An old crank phone never did fit on a tractor, and the extension cord would have been massive.

A true bib overall-wearing old timer used to have a pocket watch--usually hidden away in some Hobbit-like flap. They'd flip the cover, check the time, and fiddle around with the wind-up knob. Smartphones have the time and so much more—after all, you could be out in the pasture and suddenly need to know what time it is in Cupertino or Ulan Bator.

Smartphones can also monitor and control other farm functions. Our old barn no longer has a cow stall or a three-legged stool. Many dairy operations now use sensors and automatic devices. The robots don't seem to mind if Bossy swings her tail, swatting flies and scattering mud. A few farmers even have “bovine fitbits” on their cows—no virtual boxing classes or hot yoga sessions yet as far as I know, but they can check their screens to see if Bossy has a fever.

With smartphones and other digital technology, farmers can control soil testing, watering systems, and seed orders with the touch of a screen. They don’t need to visit the feed store--or wherever farmers used to gather—to get information or hear gossip. Google Search can tell them what new herbicide works best on pigweed, and a Twitter site might keep them up on who’s bidding what on that 160 acres outside of town. You still have to go to high school football games or church socials to get the really juicy gossip.

With precision farming on the rise, the possibilities for smartphone use are as wide as the Midwest horizon. Even leisure time can be affected. Farmers and their kids are tempted with the latest version of online games like Farmville or Hay Day. Eventually, the analog roadkill museum could include baseball gloves, kites, and the old sack swing that used to hang from an oak tree limb. 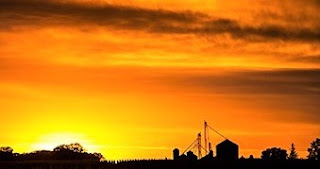 With bigger screens, better sound, crisper colors, and maybe even refined scratch-and-sniff capabilities, smartphones will make it so we don’t need to leave our living rooms. We won’t need to walk down to the bridge on the lane to watch the blue heron fish in the backwater, the snapping turtle lounge in the mud, or a small bull snake slither into the grass. The last rays of sunlight in the west and the rising moon in the east will be impressive, and the smell of new cut hay will float in from the neighbor’s field, but you’ll suddenly feel a phantom vibration and realize you left your brand new jumbo-screen iPhone in the house. Better rush back to check if anyone else took a good picture of the sunset.

by dan gogerty (top pic from pinterest.com and bottom pic from proag.com)

Posted by Council for Agricultural Science and Technology at 2:31 PM No comments: Links to this post