Hard-working pig farmers have been in the Midwest since I was an Iowa farm boy in the 1960s, but production methods have changed. The pastures and open feedlots of my youth transformed into confinement buildings and manure lagoons. While research says the modern pork industry is increasingly more efficient and economical, many communities are concerned about water and air quality. Opinions vary, often depending on which way the wind blows. 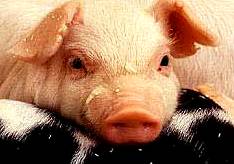 Pigs certainly emitted a distinct odor years ago, and like today, the "porcine fertilizer" we pitched into a manure spreader every Saturday morning was good for the crops but bad for a teenager trying to shed the smell before the sock hop at the gym that night. Herds were smaller and the word "confinement" was not in our ag lexicon. "Free range" wasn't either, but as often as our pigs escaped from pens, it should have been.

A few years after leaving the home place, I worked a summer job at a farm near Iowa City--a progressive operation with one of the earliest confinement facilities. I learned several new things about pork production: manure can turn from solid to all liquid; during field application, the breeze will always blow the manure mist onto the poor sap driving the cabless tractor; and the hog worker's wife will explain why his work clothes will not get past the back porch--and at times, maybe he shouldn't either.

Teaching jobs eventually took me to distant lands, but I still heard about bacon festivals and the amazing U.S. pork industry that "helps feed the world." During the 1980s, my wife and I saw an Iowa pork chop display in a small grocery store in Tokyo, replete with a state flag and a picture of the governor. When I returned to the home farm for visits, I'd wonder where all these hogs were. No more pigs wallowing in the mud, lifting feeder lids with their snouts, or trotting around the feedlot nipping at tails. For better and worse, most small hog farms had faded away.

During subsequent years the transformation continued. By 2017, at least 23 million pigs called Iowa home, and most of them booked lodging at confinement motels. In Iowa and other states, heated debates and legal actions developed. Proponents say the system is economically sound and properly managed; opponents claim the massive number of pigs contribute to health problems and a reduced quality of life.

The Matrix and a Scratch-and-Sniff Test

Americans appreciate the amazing food production accomplishments of dedicated farmers, and they understand that most try to consider neighbors and the environment while they do so. But residents get concerned if they see air and water quality deteriorate. In Iowa, most counties allow a farmer or corporation to build a new confinement system if the proposal passes the “master matrix.” To some, this system is about as confusing as the old Keanu Reeves sci-fi movie, The Matrix. Very few applicants fail the matrix, and most confinement applications get approved. 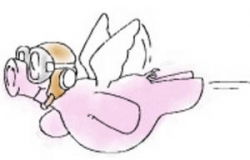 Maybe one more item should be added to the matrix—the “Scratch-and-Sniff Test.” Any official who votes to approve the confinement—and any owner of a confinement who does not live on the property—will receive specially scented boards. Whenever they have a backyard barbecue, hang out laundry, or let the kids play in the yard, they can swipe a scratch-and-sniff board with a grill brush and experience the ambience that gets carried on the breeze to the neighbors during hot summer days or when manure is applied to nearby fields.

Environment, health, economics, food production--maybe folks will cooperate and it will all work out to everyone's satisfaction. And maybe pigs will fly.

by dan gogerty (pic from usda, cartoon from squidoo.com)

Posted by Council for Agricultural Science and Technology at 1:14 PM