A Labor Day Parade, 40 Horses, and a Determined Man


During my boyhood, Zearing’s welcome sign boasted a population of 511, but the town swelled to somewhere between 40,000 and 50,000 on a September day in 1972. The famous Sparrow family lived three miles from town, and their beautiful Belgian horses pulled circus wagons for beer companies around the country. For the annual Zearing Labor Day Parade that year, they decided to match a world record by having forty of these massive horses hitched up to one huge wagon. 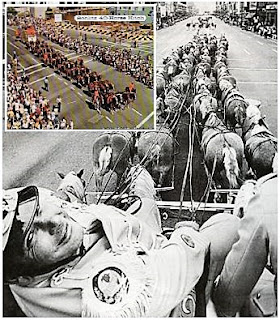 The legendary Dick Sparrow and his assistants accomplished the feat, and old-timers are still proud of the widespread attention and the fact that the resulting traffic jam shut down Highway 65, a main road about a mile west of town. The actual size of the crowd depends on which local paper you consulted and whether or not the reporter counted horses and goofy teenagers, including a group of us watching with a bird’s eye view from the roof of the old Main Street drug store.

The parade usually included Boy Scouts trying to march in time, school bands trying to play in time, and an array of farm implements and business trucks—ranging from shiny new grain harvesters and classic putt-putt tractors to the septic cleaner’s “honey wagon” with its slogan that went something like “A Royal Flush is Better than a Full House.”

That historic day included Iowa’s governor, a spiffy military color guard (they did march in step), and some impressive restored automobiles. Model T’s, Packards, Corvettes, maybe even an Edsel. My brother drove our ’56 Chevy, but by then it had been revived rather than restored. A friend had rolled the midnight blue American Graffiti machine, and they’d repainted it as an American flag. If you ignored the cracked glass, the dents and wrinkles almost made it look like the flag was rippling in the wind.

But the crowd gathered to see the horses, and when Dick and his crew brought them up the street, folks lifted kids onto their shoulders and stood on benches to get a view. As reported in the Chicago Tribune, Sparrow once said, “It’s a little like holding back a locomotive under a full head of steam with me at the throttle.”

According to The Des Moines Register, the phalanx of horses stretched 110 feet from Sparrow’s fists to the front row of animals. The team stood four abreast in 10 rows and pulled a 12-foot-tall, 4-ton circus wagon built in 1920. Dick’s son Paul said, “When you got on top of the wagon and behind all those horses, it went on forever.”

The Sparrows drove the record-setting team in various parades and promotional events. Spectators appreciated the skill and teamwork—Sparrow could get the team to back up, turn corners, and stay organized in the midst of crowds and celebration.

In order to set a Guinness world record, the Sparrows twice expanded the act to 48 horses, but for us locals the Zearing Labor Day Parade was the highlight—Dick Sparrow on the wagon holding five leather lines in each hand, outriders keeping the formation tight, and volunteers scooping up the equine road apples. The only thing they left behind was the memory of a determined man, his stunning horses, and a small town that witnessed a big accomplishment.

Posted by Council for Agricultural Science and Technology at 12:10 PM